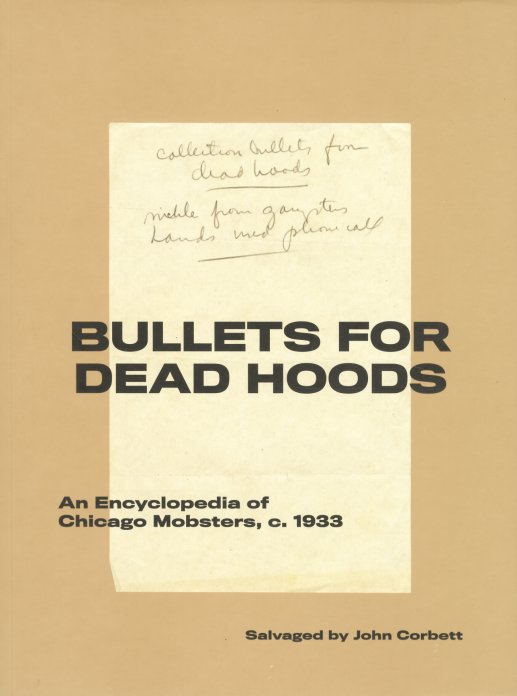 One of the most unique books we've ever gotten from John Corbett – an author who's given us some fantastic music writing over the years! This book is completely different – not written, but "salvaged" – as the contents are a lost manuscript from the early 30s – one that offers up a rundown of 140 different figures in the Chicago mob – some famous, some obscure – all written in this sharp style that's very to the point! The anonymous author offers no judgement in most cases, but provides a surprising amount of detail on each figure – from territory covered, to methods, to some of their important crimes – and their fates, if they ended up dead or in jail. The original manuscript is reproduced here exactly as it was found in a Chicago junk shop by Corbett – yellowed, brittle pages, each given a large page reproduction, with original typeface and typos – which makes it feel like you're handling the whole thing yourself. Corbett provides an introduction to the material – and then at the end, the book has some very cool features – a collection of all the locations referenced in the pages, 400 in all, most of which are presented on a pull-out map of Chicago that comes with the book! 232 pages, softcover, in full color.  © 1996-2022, Dusty Groove, Inc.

Ornette Coleman – The Territory & The Adventure
Reaktion (UK), 2020. New Copy
Book...$13.99 18.99
A deep look at the music and genius of Ornette Coleman – one that offers up so many different aspects of his career that go way past the records that we know and love – including lots of details of Coleman's early life, and his ties to other non-music communities as well! Author Maria ... Book

It's Life As I See It – Black Cartoonists In Chicago 1940 to 1980
New York Review Of Books, 2021. New Copy
Book...$17.99 24.95
A fantastic overview of little-seen work – kind of a secret history of black cartoonists on the Chicago scene, presented here in a mixture of images and supporting text! The book was done in collaboration with an exhibit at the MCA in Chicago – but it's much more a comic collection ... Book

Songs Of The Unsung – The Musical & Social Journey Of Horace Tapscott
Duke University Press, 2001. New Copy
Book...$16.99 23.95
A long-overdue moment of exposure for pianist Horace Tapscott – one of the greatest creative forces in west coast jazz in the 60s, 70s, and 80s – but an artist whose genius was often kept away from the limelight! That hardly seemed to matter to Tapscott, though – as his legacy is ... Book