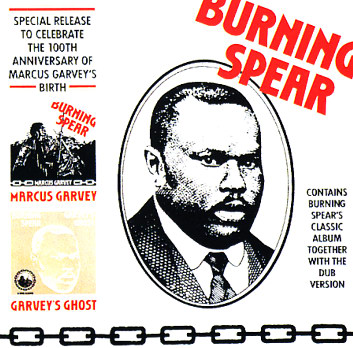 An absolute classic! If you can own only one reggae LP, this one's in the front running – it's as if the words crucial and conscious were created to define the sound Winston Rodney, Burning Spear & the Black Disciples capture on this landmark roots LP. Though this is the Island version which many claim was cleaned up a bit too much to appeal to white audiences (and the same for the dub set, which is included here), but we still think it's pretty powerful. The Black Disciples band, with Horse Wallace, Robbie Shakespeare, Family Man Barrett, Chinna Smith and others, carve out mighty dread rthythms, and producer Jack Ruby keeps the proceedings tight and right, with just the right dub effects laid over top on the dub cuts. Featuring the tracks "Slavery Days", "Marcus Garvey", "The Invasion", "Red, Gold, & Green", "Resting Place", and "Live Good", plus this CD issue adds the dub companion LP, Garvey's Ghost, the dubs "The Ghost", "I & I Survive", "Black Wa-Da-Da", "Brain Food", "Dread River", "Reggaelation" and more, for a total of 20 tracks in all!  © 1996-2021, Dusty Groove, Inc.