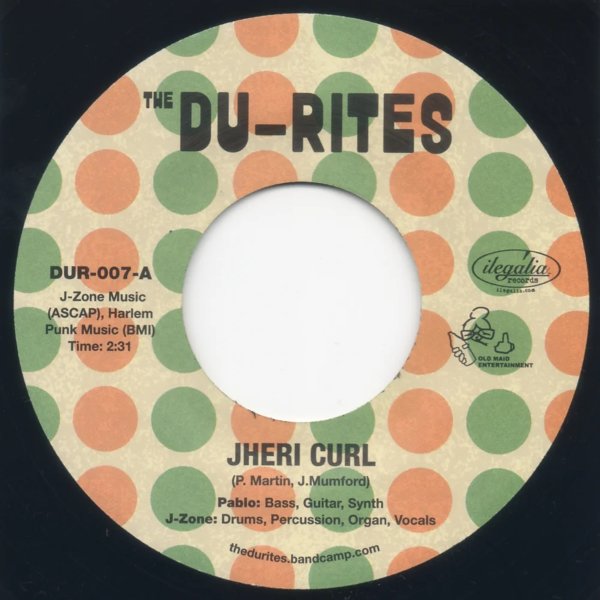 There's plenty of hard drums at the start of "Jheri Curl" – very much in a classic break style, but complicated by a very cool bassline too – while riffing guitar makes all these spooky sounds throughout, matched by a bit of cool vocalizations! "Du-Vibrations" has lots more drums too – almost like something that Mark The 45 King would have cooked up – as the bass gets a bit wilder, and encourages the guitar to do the same!  © 1996-2022, Dusty Groove, Inc.

Fuz & Da Boog/Cookie Jar (alt)
Westbound/BGP (UK), Mid 70s. New Copy (reissue)
7-inch...$12.99 14.99
One of the real classics from the great Fuzzy Haskins – the mighty "Fuz & Da Boog", an oft-sampled cut that mixes massive drums with rolling basslines that really set up a groove – before soaring horns knock the whole thing out of the park! The flipside is a rare ... 7-inch, Vinyl record

Spider Man/Soul Yogi
Prestige/BGP (UK), Late 60s. New Copy (reissue)
7-inch...$12.99 14.99
Two of the grooviest 60s cuts from vibist Freddie McCoy – back to back as a funky 45! "Spider Man" is nothing like the theme of the old cartoon – as instead Freddie moves with a fast-stepping rhythm that uses added percussion next to the drums and bass, while the vibes move ... 7-inch, Vinyl record

It's Not That Easy/Hummin A Sad Song
Murco/BGP (UK), 1967. New Copy (reissue)
7-inch...$12.99 14.99
A fantastic bit of deep soul from Reuben Bell – a singer with a voice that's a register or two higher than most of his contemporaries, but which also gives this tune a really special sort of vibe! Bell's got a heartbreaking quality on the classic "It's Not That Easy" – really ... 7-inch, Vinyl record

World Needs Changin/Getting On Down
Call Me/BGP (UK), 1970. New Copy (reissue)
7-inch...$12.99 14.99
Hank Jacobs cut some great instrumentals in the 60s – but here, he steps out with a really message-oriented vocal cut – the fantastic "World Needs Changin", a track with a funky rhythm at the core, and a mighty righteous lyric over the top! "Getting On Down" is on ... 7-inch, Vinyl record

Over & Over/I Need Somebody To Love Tonight
Fantasy/BGP (UK), Late 70s. New Copy (reissue)
7-inch...$12.99 14.99
A sublime clubby classic from Sylvester – a tune that's part soul, part disco, and plenty darn nice all the way through! The long 12" single mix often gets a lot of play – but there's maybe even more charm here to the shorter 7" mix, which really focuses in on the hook of the ... 7-inch, Vinyl record