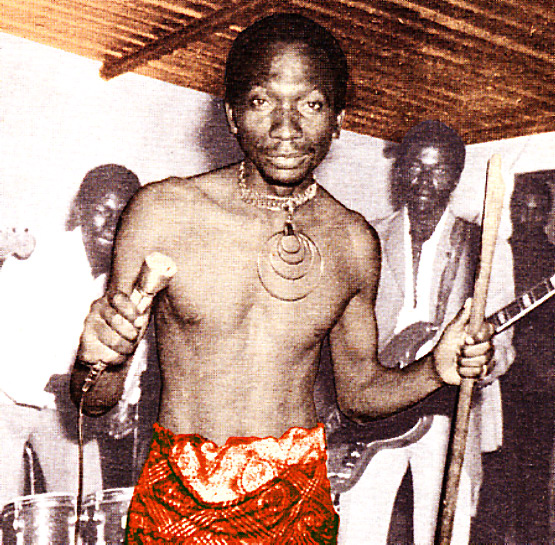 A vital compilation of 70s material by Zimbabwe's Hallelujah Chicken Run Band! The Hallelujah Chicken Run Band vocals are led by the great Thomas Mapfumo, but overall it's very much a group effort that's rich in harmonies and backing vocals by all of the members. The guitars are just as important – a rhythmic, spindly, "plucked" electric groove inspired by the mbira – a sound that was enormously influential and will sound fresh forever! Those great guitar parts come from Joshua Hlomayi Dube and Elisha Josam – inspired by the mbira music that was , with bass by Robert Nekati, trumpet by Daram Karanga. Mapfumo plays drums, too – and many tracks have additional horns other elements from a loose group of fellow players. The set features some early material that was produced for the Teal label, and later 70s work – all of it warm, melodic and welcoming – and the sound quality is really great! 18 tracks in all: "Mudzimu Ndiringe", "Kare Nanhasi", "Manheru Changamire", "Tamba Zimba Navashe", "Mutoridodo", "Sekai", "Gore Iro", "Musowore Moyo", "Shumba Inobva Mu Gomo", Alikulila", "Ndopenga", "Tinokumbira Kuziva", "Chaminuka Mukuri" and more.  © 1996-2020, Dusty Groove, Inc.
(Out of print US pressing.)

4 Track Recording Session
Analog Africa (Germany), Mid 70s. Used
CD...$8.99
An amazing tribute to The Green Arrows – an ultra-hip combo from the 70s scene in Zimbabwe! The group had a sound that was dubbed "waka-waka" by its fans – thanks to unique guitar parts that wobble back and forth with the rhythmic groove of the tunes – often recorded ... CD

Legend Of Funana – The Forbidden Music Of The Cape Verde Islands
Analog Africa (UK), 1997. Used
CD...$11.99
An album with a very unusual vibe – one that showcases the Cape Verdean style of funana – a fast-moving groove that features accordion in the lead! That instrument is played here by Bitori – who was 57 years old at the time of the recording, but plays with the deft energy of a ... CD

Super Afro Soul/Orlando's Afro Ideas 1969 to 1972
Vampi Soul (Spain), Late 60s/Early 70s. Used 2CD
CD...$18.99
An incredible double pack of African Funk – featuring 2 albums' worth of material by the legendary Orlando Julius! Julius was one of Nigeria's biggest soul artists in the 60s – and has been credited with virtually inventing the Afro Funk sound, and for being the inspiration to some of ... CD