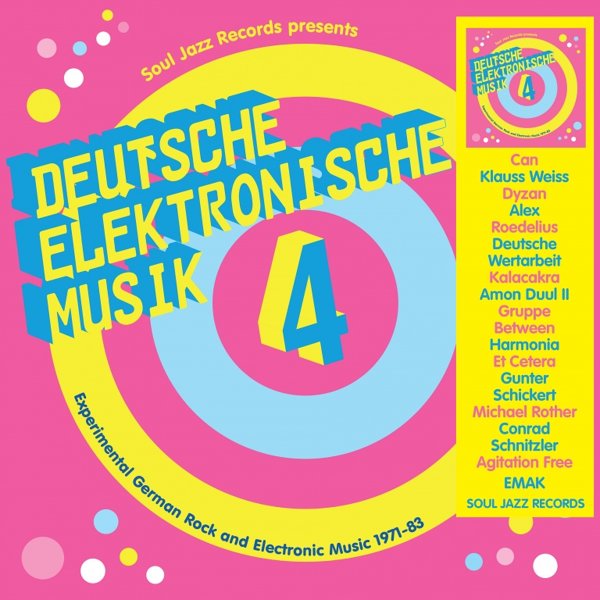 A really fantastic compilation – and one that will take your collection of German electronic music far past the familiar territory of Kraftwerk and Tangerine Dream! This series has always been great, but it also seems like the longer it goes, the deeper it digs – which is definitely the case here – as the genius compilers at Soul Jazz mix together rare cuts from better-known names, and more obscure artists from the 70s – in modes that also move past straight electronic music, to include some funky bits, proggy moments, and a nice shift between vocal and instrumental focus – so that there's a really amazing world of music within. Titles include "Pink Sails" and "Driving Sequence" by Klaus Weiss, "Wolf City" by Amon Duul II, "Guten Aben Leute" by Deutsche Wertabeit, "My Strand Eyed Girl" by Virus, "Patella Black" by Alex, "Dragonsong" by Dyzan, "Deluxe" by Harmonia, "Suleika" by Gunter Schickert, "Schopfung" by Witthuser & Westrupp, "Mellodrama 2a" by Et Cetera, "Nearby Shiras" by Kalacakra, "Tanz In Den Himmel" by Emak, and "Ballet Statique" by Conrad Schnitzler.  © 1996-2021, Dusty Groove, Inc.
(Includes download!)

New Orleans Funk – The Original Sound Of Funk 1960 to 1975 (3LP set)
Soul Jazz (UK), 1960s/1970s. New Copy 3LP
LP...$39.99 44.99
One of the best compilations of New Orleans funk we've ever seen! Sure, the reissue market is always filled with stuff from the Crescent City – but so many New Orleans compilations are cheapo knock-offs, designed to cash in on the drunk Jazz & Heritage crowd, or they're simplistic sets ... LP, Vinyl record album