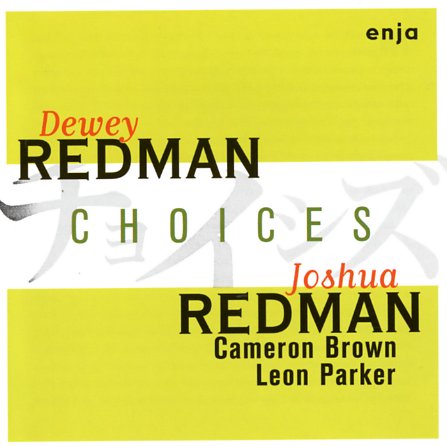 Late work from avant tenor legend Dewey Redman – and surprisingly great, with all the best energy of his sides from older years! The album features Dewey playing in a trio with Cameron Brown on bass and Leon Parker on drums – plus guest appearances on about half the tracks by a young Joshua Redman, who really helps flesh out the sound of the set – at a point when he was just starting to let the world know about his talents. Redman senior is still the main attraction, though – blowing strongly on alto, tenor, and even a bit of musette – but also letting Joshua take all the horn parts on one track. Titles include surprisingly great readings of two standard ballads – "Everything Happens To Me" and "Imagination" – plus the tracks "Le Clit", "For Mo", and "O'Besso".  © 1996-2021, Dusty Groove, Inc.
(Part of the "Enja – Real Jazz Classics" series!)