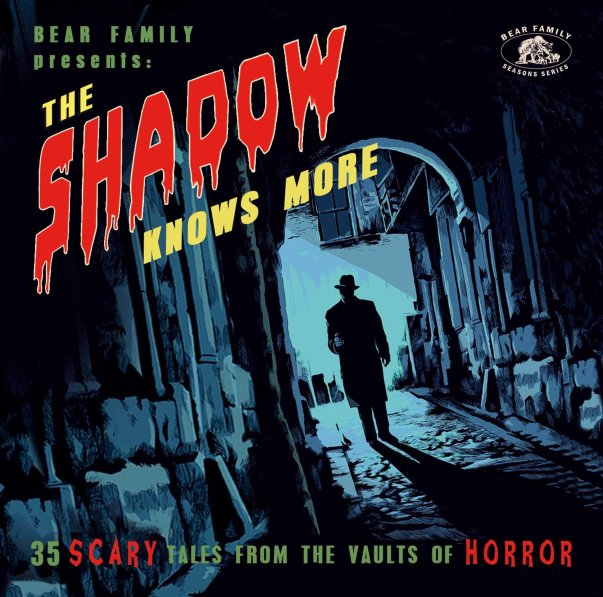 Shadow Knows More – 35 Scary Tales From The Vaults Of Horror

Totally great sounds for the Halloween season – a mad mix of instrumentals, vocals, and offbeat singles from the late 50s and early 60s – exactly the kind of music that keeps things weird and wild on the last day of October! Some of these gems are in the best novelty mode of the time, while others have more of a horror rock sort of vibe – and together, the package is a wonderful tribute to a near-lost genre – one that maybe got a bit wrecked when groups like The Cramps or Misfits tried to celebrate the sound all year long! 35 tracks in all – including "Tickler" by The Sherwoods, "Beware" by Bill Buchanan, "The Gorilla" by Bert Convy, "The Creep" by Ted Heath, "Voodoo Walk" by Sonny Richards Panics, "Something's Going On In My Room" by Daddy Cleanhead, "Hell's Bells" by David Carroll, "Devil's Den" by Duante Turley, "The Raven" by Freddie Countryman, "The Ghost Song" by Salty Holmes, "When All The Streets Are Dark" by Somethin Smith & The Redheads, "Dear Jeepers" by Bob Guy, and "Ghost Guitars" by Baron Daemon & The Vampires.  © 1996-2021, Dusty Groove, Inc.

Shadow Knows – 34 Scary Tales From The Vaults Of Horror
Bear Family (Germany), 1930s/1940s/1950s/1960s/1970s/Early 80s. New Copy
CD...$9.99 11.99
If you know us at all, you'll know that we really love a well-themed compilation – and we're especially in love with the sort of collection like this – which can bring together all sorts of weird and unusual singles with the united spirit of a holiday theme! This collection is even ... CD

Trick Or Treat – Music To Scare Your Neighbors – Vintage 45s From Lux & Ivy's Haunted Basement
Righteous (UK), Late 50s/Early 60s. New Copy 2CD
CD...$14.99 20.99
Who better to spend Halloween with than Lux and Ivy of The Cramps – a pair who almost act like it's the last day of October all year long! Lux and Ivy are well-known as collectors of strange and offbeat 45s from the late 50s and early 60s – and that period also coincides with a great ... CD

Monster Mash Collection
Jasmine (UK), Early 60s. New Copy
CD...$15.99 16.99
Two different takes on the monster rock craze of the 60s – served up here on a single CD! First up is the original Monster Mash album from Bobby Boris Pickett & The Crypt Kickers – one of the all-time classic Halloween novelty records! You might know the classic title cut – ... CD

Halloween Nuggets – Monster Sixties A Go Go (3CD set)
Rock Beat, Mid 60s. New Copy 3 CDs
CD...$29.99 30.98
A hip batch of Halloween nuggets – rare singles, mostly from the 60s – and mostly recorded during that wonderful moment when monster movies and rock and roll had a really happy collision! That era yielded plenty of hits, but this set digs way way deeper than those – to come up ... CD

Monsters, Vampires, Voodoos, & Spooks – 33 Slabs Of Undead Rock N Roll
Jasmine (UK), Late 50s/Early 60s. New Copy
CD...$13.99 14.99
A hip celebration of all things spooky – pulled from that wonderful late 50s/early 60s stretch when the novelty market was overflowing with rock and soul songs based on Halloween topics! This collection is nicely huge – and while there's a few tracks here you might know from big fame, ... CD