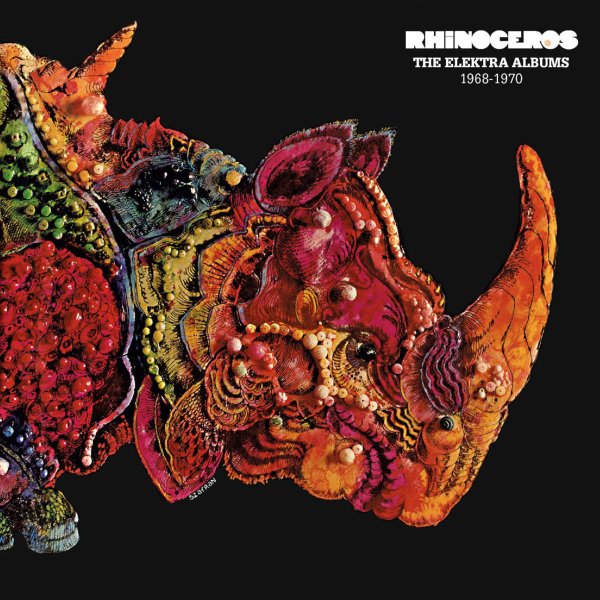 A great little package – three overlooked gems from Rhinoceros – all packaged together in a single box set! First up is their self-titled debut – the great first album from Rhinoceros – a group that's every bit as heavy as their name, and who really deserved much bigger fame than they received at the time! The sound is a great late 60s fusion of psych, blues rock, and other modes – given a nice Elektra Records spin and sense of freedom that really allows the group to be something strong on their own – sometimes adding in more sensitive vocals or harmonies that really show a lot of depth – balanced by strongly jamming guitar and lots of heavy drums! Titles include "When You Say You're Sorry", "I Need Love", "Belbuekus", "I Will Serenade You", "Along Comes Tomorrow", "Apricot Brandy", and "That Time Of Year". Next up is Satin Chickens – only the second album from Rhinoceros, and the group are already stretching out their wings – as you might guess from the offbeat cover of "Satin Doll" that beings the proceedings! As before, Rhinoceros are a wonderfully fine-tuned ensemble – working here with the sharpness of the best of the Bay Area or Detroit groups of the generation – which helps them move through familiar styles into very different territory that's all their own – yet supported by the kind of well-crafted guitar work, heavy rhythms, and thoughtful vocals that really earn them a place in the pantheon of Elektra Records during the golden years. Titles include "Monkee Man", "Don't Come Crying", "Back Door", "Funk Butt", "In A Little Room", "Chicken", and "Top Of The Ladder".  © 1996-2021, Dusty Groove, Inc.