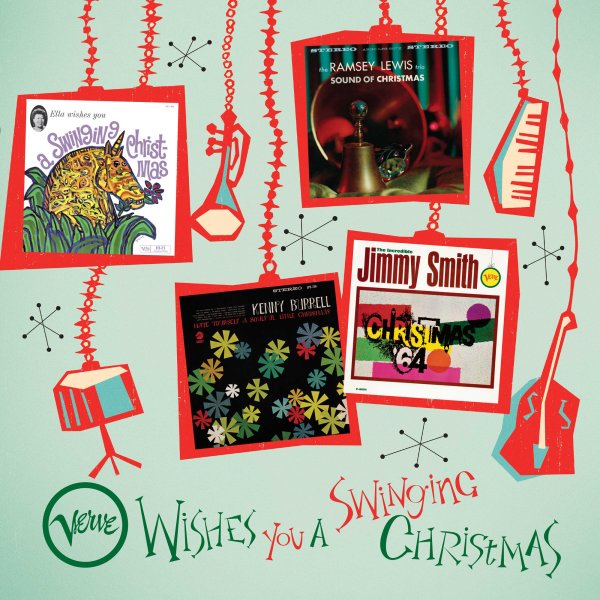 Four Christmas classics in one package – two from Verve, two from Chess Records! First up is the album Ella Fitzgerald Wishes You A Swinging Christmas – a wonderful Holiday album that's stayed fresh for years! Ella's got a perfect style to interpret these numbers – working with Frank DeVol and Russ Garcia in a set of lightly jazzy versions of Christmas favorites like "Sleigh Ride", "Jingle Bells", "Winter Wonderland", "White Christmas", "Frosty The Snowman", and one of the best versions of "What Are You Doing New Years Eve" ever recorded! The Sound Of Christmas album by Ramsey Lewis is a classic – and probably one of the best-selling Christmas jazz albums of all time! Ramsey and his classic trio with Redd Holt and Eldee Young serve up a tight set of grooves based around Holiday favorites like "Santa Claus Is Coming To Town", "Winter Wonderland", "Here Comes Santa Claus", "The Christmas Song", and "Sleigh Ride" – and also carve out a few nice originals like "Christmas Blues" and "The Sound Of Christmas". Side one features the trio on its own, and side two features added arrangements by Riley Hampton – swirling around to expand the groove even more! Christmas 64 – also issued as Christmas Cookin – is as cookin a Christmas album as you'll ever find! Jazz organ giant Jimmy Smith works with Billy Byers to craft some sublime instrumentals that have his Hammond interpreting Christmas classics like "We Three Kings", "White Christmas", "Silent Night", "God Rest Ye Merry Gentlemen", and "Santa Claus Is Coming To Town". If you know Jimmy from the time, you know that he can really make tracks like these groove nicely – and take them to places you never expected! Last up is the album Have Yourself A Soulful Little Christmas, from guitarist Kenny Burrell – on which he grooves nicely and gently over arrangements by Richard Evans, perfectly crafted in that soul jazz mode of his 60s work for Chess – not Kenny's most challenging format, to be sure, but proof that he often works better in a more structured environment than a freer one. Titles include "Away In A Manger", "My Favorite Things", "Little Drummer Boy", "Have Yourself A Merry Little Christmas", "Merry Christmas Baby", and "Go Where I Send Thee".  © 1996-2021, Dusty Groove, Inc.
(All four albums with original cover art on the jackets – in a cool slipcover too!)