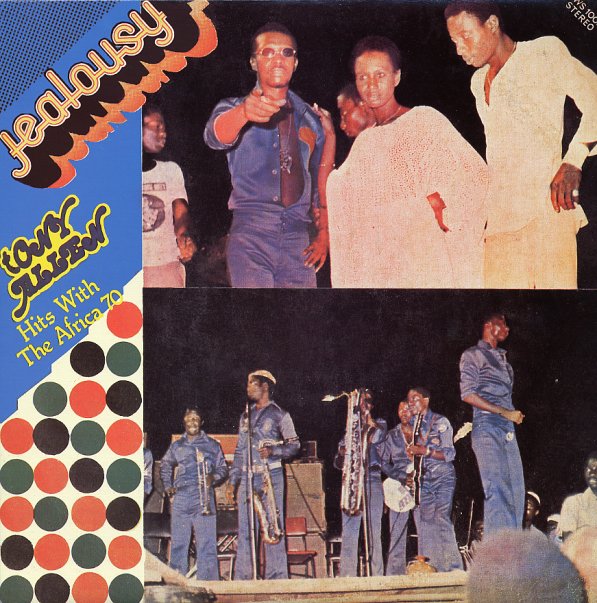 The start of a legend – the tremendous debut of drummer Tony Allen as a leader, after some key 70s work in the group of Fela Kuti! Fela's group is backing Tony up here – the key Afrika 70 lineup – and even Fela gets in on the action by laying down some piano solos and tenor – key proof that he had plenty of faith in Tony going out on his own! And heck, Fela even produced the record, and helped Allen with arrangements on his tunes – two side-long jammers that really live up to any expectations you might have, and which make the Afrika 70 legend proud – "Jealousy" and "Hustler".  © 1996-2022, Dusty Groove, Inc.
(Great pressing – in a heavy cover!)

No Accommodation For Lagos
Comet (France), 1979. New Copy (reissue)
LP...$26.99 44.99
Fantastic stuff – and one of the records that made drummer Tony Allen a legend, and one of the key musicians to step out of the larger setting of the Afrika 70 group of Fela Kuti! Allen's the leader here, and the vibe is nicely a bit different than some of Fela's records – although the ... LP, Vinyl record album

No Discrimination
Comet (France), 1979. New Copy (reissue)
LP...$22.99 44.99
Tony Allen steps out onto his own – moving away from the Afrika 70 group who accompanied him on his first three solo albums – nicely cooking here into a whole new groove! The tracks are a bit shorter than the side-long jams of previous records, but no less funky – as Tony somehow ... LP, Vinyl record album