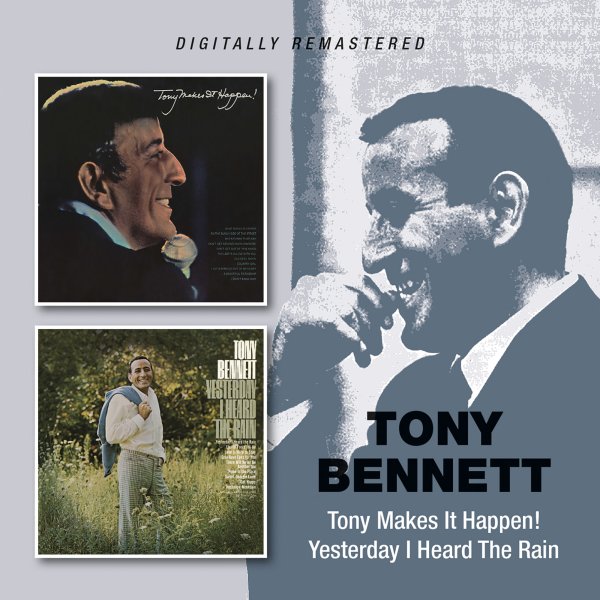 Tony Makes It Happen/Yesterday I Heard The Rain

A pair of late 60s Columbia classics from Tony Bennett – back to back on a single CD! First up is Tony Makes It Happen – a very jazzy album, with a group that features Joe Wilder and Joe Newman on trumpets, Urbie Green on trombone, Joe Soldo on flute, and orchestrations from Marion Evans – all of whom really bring out those unique qualities that set Bennett apart from so many other singers in his generation! Where a Vic Damone might have used his inherent richness to push things over the top, the maturing Tony is a master of restraint – still able to run the full gamut of his amazing range, but set up with these beautiful arrangements that bring some adult understanding to the tunes, in a beautifully subtle vibe. Titles include "What Makes It Happen", "I Don't Know Why", "Can't Get Out Of This Mood", "She's Funny That Way", "A Beautiful Friendship", and "Don't Get Around Much Anymore". Next is Yesterday I Heard The Rain – fantastically mature work from Tony Bennett – a record that follows in that great direction the singer was taking in the 60s – delivering sophisticated vocals that didn't care much for the charts, but which really stand the test of time as the years go by! As on some of Tony's best from the period, arrangements are by Torrie Zito – whose careful orchestrations always let Bennett's vocals soar out in the lead, while also hitting some occasional flourishes that bring just the slight touch of drama to the music – but never in the over the top styles of some of his contemporary! Space is the key here – lots of space between the words and the notes – which makes even simpler songs sound pretty darn amazing. Titles include "Sweet Georgie Fame", "Fool Of Fools", "Only The Young", "I Only Have Eyes For You", "Yesterday I Heard The Rain", and a surprisingly great version of "Hushabye Mountain".  © 1996-2022, Dusty Groove, Inc.