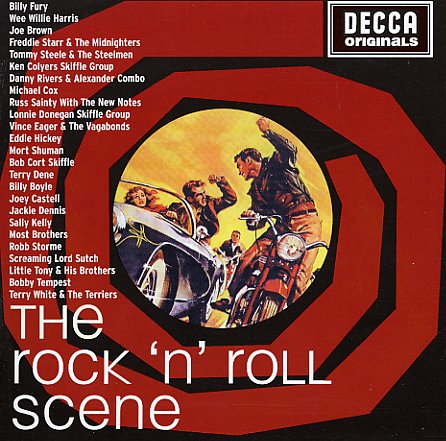 A really haunting set of British rock and roll from the end of the 50s – one that mixes together American-styled numbers with some really unique British tunes! The styles here include guitar-based rock that's definitely copping a US groove – plus other strands of music pulled from the skiffle and pop scenes of the time. Titles include "La Dee Dah" by Jackie Dennis, "Too Hot To Handle" by Michael Cox, "Pretty Little Pearly" by Jackie Dennis, "Rock Island Line" by Lonnie Donegan, "Transistor Sister" by Robb Storme, "Turn Me Loose" by Mort Shuman, "It's Shaking Time" by Freddie Starr & The Midnighters, "Foxy Little Mama" by Little Tony & His Brothers, "Whole Lotta Woman" by The Most Brothers, "Colette" by Billy Fury, and "My Baby's Crazy Bout Elvis" by Billy Boyle.  © 1996-2021, Dusty Groove, Inc.
(UK Record Store Day limited edition pressing!)