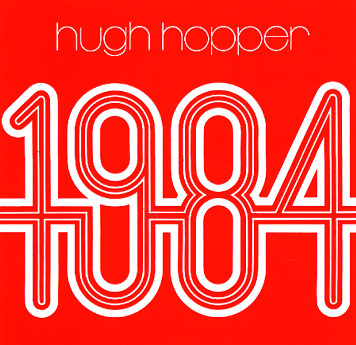 The first-ever solo album from Hugh Hopper – best known as the bassist for Soft Machine, but an equally creative artist on his own! The album is a bit more experimental, and sometimes more jazz-based, than Hugh's work in the bigger group – a blend of odd acoustic sounds with slight electronic elements – sometimes a bit abstract, sometimes a lot more focused and tuneful! The album's a key underground expression from the bigger UK jazz rock scene of the time – proof that its more adventurous roots were still present in the best players – and Hopper's work here on bass, percussion, and mellophone is augmented by a shifting array of players who include John Marshall on percussion, Gary Windo on tenor sax, Malcolm Griffiths and Nick Evans on trombone, Lol Coxhill on soprano sax, and Pye Hastings on guitar. Titles include "Miniluv", "Minipax 1", "Minitrue", "Miniplenty", "Miniluv Reprise".  © 1996-2021, Dusty Groove, Inc.
(On translucent red vinyl!)