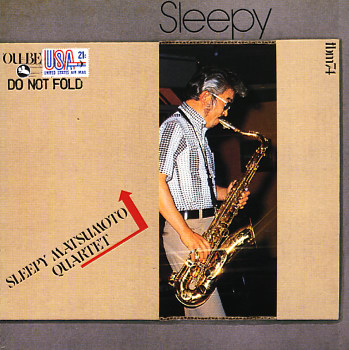 Hidehiko Matsumoto may have the nickname of "sleepy", but his playing is anything but – and at the time of this recording, he was easily one of the greatest saxophonist working the Japanese scene! The style of the album has Matsumoto right out front on most numbers – getting backing from piano, bass, and drums – but often in ways that are somewhat restrained and spacious, in the Three Blind Mice mode of the period. Sleepy plays his usual tenor sax, plus some great flute too – and titles range from mellow, introspective tunes that really showcase his lyrical side – to a few faster tunes that take off with a very nice edge. Titles include "Duke's Days", "Chasin The Blues", "You Don't Know What Love Is", "Typhoon", and "Right Down Step".  © 1996-2020, Dusty Groove, Inc.
(Part of the Three Blind Mice Supreme Collection!)