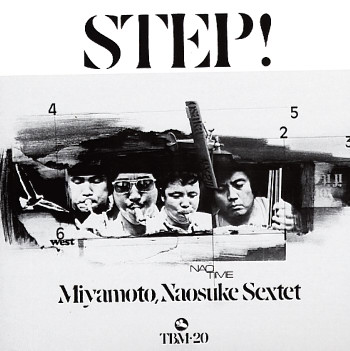 A group led by bassist Naosuke Miyamoto, but one that features some especially great horn work in the lead! The ensemble's a sextet, and features a three-point frontline with trumpet from Kunji Shigi, alto from Takashi Furuya, and tenor and soprano from Takeshi Goto – really stretching out on a batch of tracks that build strongly from 60s soul jazz expression, but take the tunes to a hipper sort of 70s level. Key numbers include the Harold Land compositions "Step Right Up To The Bottom" and "A New Shade Of Blue" – both of which feature tremendous horn interplay – plus the originals "Where Do They Go", "Blues", and "One For Trane".  © 1996-2020, Dusty Groove, Inc.
(Part of the Three Blind Mice Supreme Collection!)