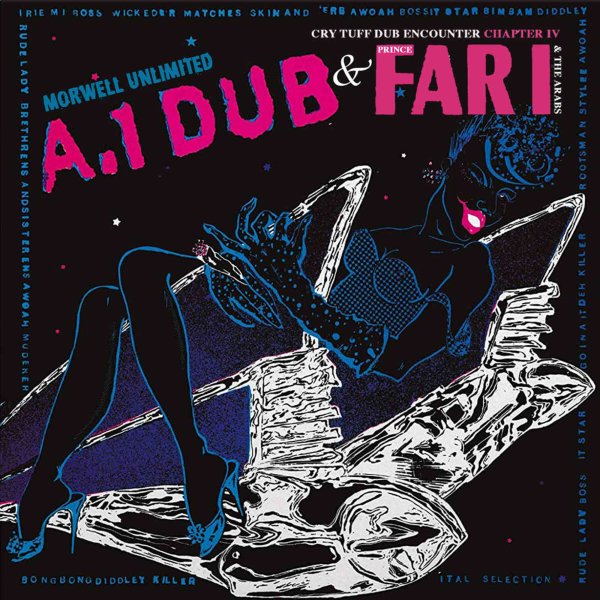 A pair of rare dub albums – back to back in a single set, with bonus tracks too! On A1 Dub, Blacka Morwell serves up some massive dub – working at Channel 1, for an obscure album on Trojan Records – but maybe coming across with some of the richness of the Island Records generation! There's a fullness to the sound that's wonderful – top-to-bottom completely solid, and often highly focused on the rhythms, but also always using one key instrumental element on each cut – a bit of organ here, a weeping guitar there, or even an odd sonic element – always given center stage in the spotlight, and set apart from the rest of the mix in a really great way. Titles include "Downtown Rebel", "Well Crucial", "Different Style", "West Side Ranking", "Pressure Rock", "Blackboard Jungle", and "Waterpump Skank". Next is Cry Tuff Dub Encounter 4 – from Prince Far I & The Arabs – an almost seamless set of dub instrumentals, recorded at Channel One in 1981 – the underground Jamaican groove, but maybe given a slightly better sound quality overall – that good mix of indie and professional that was the Trojan Records calling card as the 70s moved on! A crisp upfront production style separates this one from some of its dub predecessors – but the record has a great analog dub sound, with many effects and instruments echoing in and out of the mix. Titles include "Lion Stone", "Foundation Stepper", "Sound Gesture", "Destruction Sound Battle", and "Stone African Ground". And if that's not enough, the whole thing features a whole CD of bonus material – rare tracks taken from the 12" Attack series by Trojan Records – with cuts that include "Jammin For Survival" by Jammy's At The Controls, "Bali Hi Special" by The Sowell Radics, "Fuss & Fight Dub" by Eddie Fitzroy, "Ball Of Fire" by Bim Sherman, "Stand & Look Dub" by Fat Man All Stars, "Caring For My Sister" by Scientist & Roots Radics, "Won't You Come On (dub)" by Witty's All STars, "Babylon Wrong Dub" by Ashanti Waugh, and "Cool Pon Your Corner Version" by Barry Brown.  © 1996-2021, Dusty Groove, Inc.