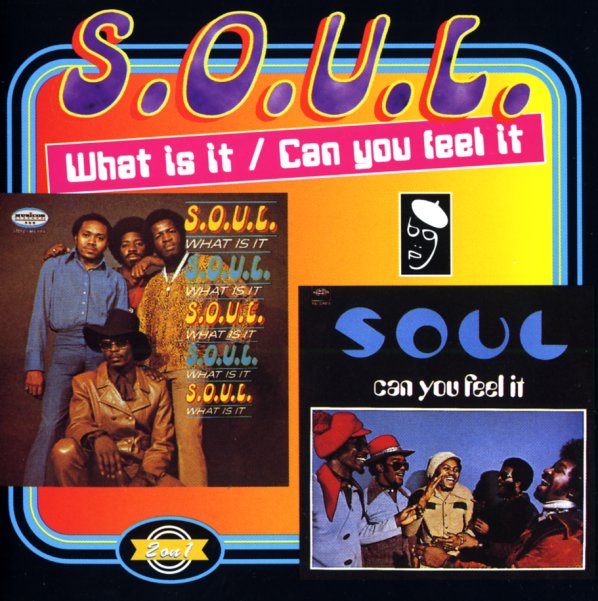 What Is It/Can You Feel It

Incredible work from a group who've definitely earned their name! Naming a group SOUL might be suicide for a band that can't carry off the groove – but these guys are funky monsters, with a real talent for a hard heavy sound that was rarely matched by other combos. The band have a great drummer, with a good talent for the funky break, but also a jazzy flourish that works well on SOUL's mellower numbers – and apart from the usual bass and guitar riffing, the album also features some great funky flute, in a mode that's similar to some of Jeremy Steig's excellent early work. Some tracks have vocals and some have instrumentals – and both albums are great! ACE put together both these masterpieces of heavy funky grooves and laid them back to back on one CD of super-heavy funky tracks. The set's a great deal, and both albums are winners all the way through! Tracks include "Down in the Ghetto", "Burning Spear", "Soul", "Tell it Like It Is", "Peace Of Mind", "My Cherie Amour", and "Sleeping Beauty".  © 1996-2022, Dusty Groove, Inc.

Just A Little Misunderstanding – Rare & Unissued Motown 1965 to 1968
Motown/Kent (UK), Mid 60s. New Copy
CD...$13.99 19.99
Just when you think you know everything there is to know about Motown, here comes a set to open your ears and blow your mind all over again! The set unearths a huge amount of rare work by The Contours – the rollicking group who gave Motown a sweet album and handful of singles in the 60s, but ... CD