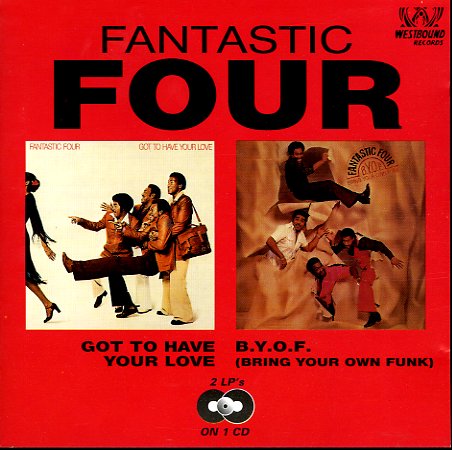 A pair of albums from this overlooked Detroit soul group – back to back on a single CD! On Got To Have Your Love, Fantastic Four are a hell of a harmony group – and one who still hold strong through this second chapter of their career – by avoiding any of the cheaper cliches of some of the groups of the disco generation! Instead, the album focuses on their vocals first, and any sort of grooves second – which makes for some wonderful mellower cuts that really follow the spirit of some of the hippest 70s group soul from Chicago or the east coast – followed by a few upbeat tracks that get handling by Tom Moulton at Sigma Sound in Philly! The balance is great – almost more like some of the best group sides from a few years before, especially Blue Magic – and the ballads really take center stage, and blow us away with the group's deeper currents of soul. Titles include "Mixed Up Moods & Attitudes", "There's Fire Down Below", "I Got To Have Your Love", "She'll Be Right For Me", "Cash Money", and "Disco Pool Blues". On BYOF, the Fantastic Four definitely bring their own funk – thanks to tight help from arranger Dennis Coffey, who also produced the set with a heavy groove that's like his own work of the time! The basslines are stronger than before for the FF – but their harmonies are very firmly intact – and, if anything, the blend of funk and great vocals really makes the album a charmer right from the get-go – especially as they aim more for midtempo steppers than too-upbeat disco tunes that might have them losing some of their charm. The overall vibe is maybe more 1974 than 1978 – and titles include "I Just Want To Love Ya Baby", "BYOF", "Cold & Windy Night", "Sexy Lady", "Shout", "Super Lover", and "Realize".  © 1996-2023, Dusty Groove, Inc.