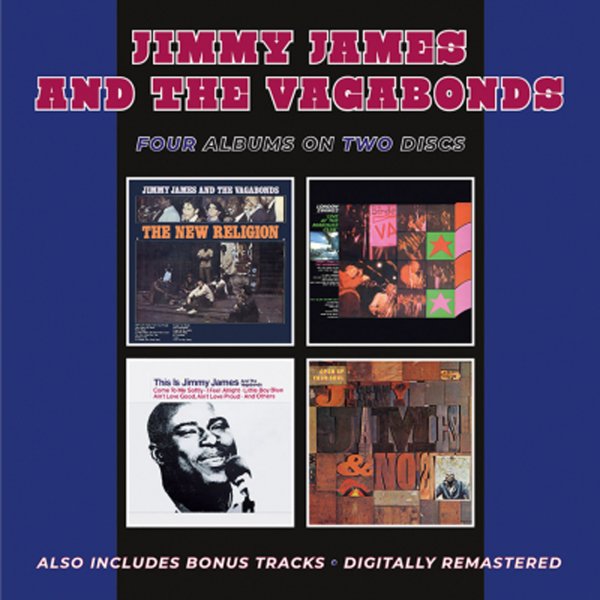 Four classic albums from this hip British soul group – issued here in a single set, with bonus tracks too! First up is New Religion – a record that was also released in America by Atlantic Records. Although they were a UK soul act, Jimmy James and The Vagabonds were a perfect match for the Atlantic soul stable of the 60s. The group had a smooth group style that was partly uptown, partly northern soul – as clearly illustrated in this album, which is divided up into a "mood red: you feel like leaping" side, and a "mood blue: you feel like digging deeper" side. The band chose some good material that really helps them maintain a solid socking soul sound – including "The Entertainer" and "Ain't Love Good, Ain't Love Proud" by Tony Clarke, "Ain't No Big Thing" and "I'm Just A Fool For You Girl" by Gerald Sims, and "Little Boy Blue" and "People Get Ready" by Curtis Mayfield. Also features "Come To Me Softly", a sweet dreamy ballad by Jimmy, and kind of a bit crossover hit for the boys. London Swings is two-sided monster – as the album was originally split with work from the Alan Bown Set too! Here, the CD features just the live material from the soul group – a smoking performance from Jimmy James & The Vagabonds – one that goes way past the sweetness of their hits, and which has a crowd-pleasing, party-hearty approach to soul that's really great! Jimmy and the group serve up versions of "Sock It To Em JB", "That Driving Beat", "Ain't Too Proud To Beg", "You Don't Know Like I Know", and "Don't Know What I'm Gonna Do". This Is Jimmy James & The Vagabonds is a record that featured some crossover tracks with New Religion – but the set here just features the exclusive cuts – including "I Feel Alright", "I Can't Get Back Home To My Baby", "Never Like This Before", "I Don't Wanna Cry", and "You Showed Me The Way". Open Up Your Soul is a record with a really wonderful sound – the deeply soulful vocals of Jimmy James & The Vagabonds, mixed with rich arrangements handled by Nicky Welsh, and produced to perfection by Brit maestro John Schroeder! The record's got the sophistication of some of the Richard Evans productions over at Chess/Cadet at the same time – and, no surprise, the group lead off with a great cover of The Dells "Wear It On Our Face" – then roll into cuts that include "Cry Like A Baby", "Good Day Sunshine", "Four Walls", "Everybody Loves A Winner", "If You're Gonna Love Me", and "Open Up Your Soul". CD also features 7 more bonus tracks from singles – including "Why", "Bumper To Bumper", "Close The Door", "Give Us A Light", "I Wanna Be your Everything", "Hungry For Love", and "Don't Know What I'm Gonna Do".  © 1996-2022, Dusty Groove, Inc.

Gap Band VI/Gap Band VII (with bonus tracks)
BGO (UK), Mid 80s. New Copy 2CD
CD...$8.99 19.99
Electro-steeped funky soul from The Gap Band – a pair of mid 80s classic LPs in a 2CD set with bonus tracks! They're already past the "V" in their classic run of 80s albums at this point, and still very much at the top of their game. The core trio work with sweet production from ... CD