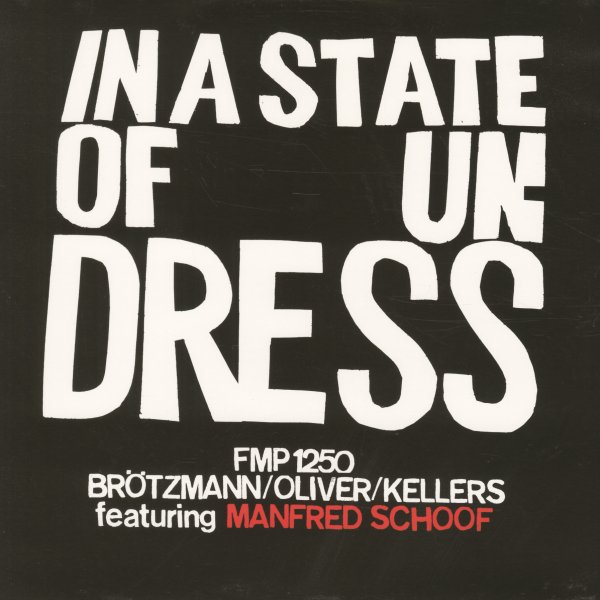 One of the most obscure Peter Brotzmann sessions on FMP – an overlooked session from the end of the 80s, and one that also features superb work from trumpeter Manfred Schoof! Schoof's an equal German jazz legend from the same generation – but one who spent some of his 70s and 80s years cutting more atmospheric music than the bracing free improvisation of Brotzmann – so their pairing here makes for a really special sort of blend – a record that still stands strongly in the best free tradition of FMP, but which also takes some different directions too! The first track on the album, which is quite long, actually swings in points – but goes far outside on others – and the group really seems to catch fire when Jay Oliver is set loose on bass and Willi Kellers takes off on drums – inspiring the kind of mindblowing work we expect from Brotmann on his saxes. Titles include "Certainly", "Trollymog", "Urinato", "In A State Of Undress", and the beautiful ballad "Berlin Grey For A Rainy Day".  © 1996-2021, Dusty Groove, Inc.
(Limited edition of 200 copies!)

Contemporary Jazz Mass
JTTP/Be! (Germany), Early 70s. New Copy (reissue)
LP...$22.99
A jazz mass, but unlike any other variation on the theme that's ever been recorded – thanks to a very righteous performance from James Tatum – who makes the whole thing feel much more like an organic spiritual jazz set than anything you'd ever find in a church! James himself plays both ... LP, Vinyl record album