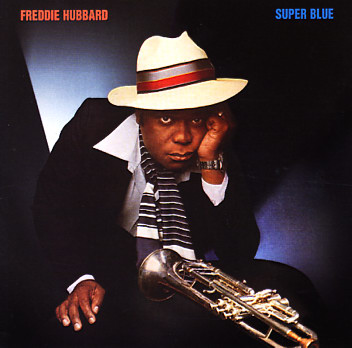 Also available
Freddie Hubbard — Super Blue ... LP 1.99
A sweet late 70s set from Freddie Hubbard – a slight move away from some of his highly-electric sides of the CTI years, yet one that still has some of the most soulful qualities of that work! Freddie's trumpet has a nicely spacious quality throughout – one that's flowing, and almost glowing at time – cascading along with qualities you might be more likely to hear from Art Farmer on some of the gentler numbers, yet really bursting out with that old Hubbard dynamism on the rest. Other players include Joe Henderson on tenor, Hubert Laws on flute, Kenny Barron on piano and keyboards, Ron Carter on bass, and Jack DeJohnette on drums – and George Benson also guests on guitar on one number too. A good number of the titles are originals, and tracks include "Super Blue", "To Her Ladyship", "Take It To The Ozone", "The Gospel Truth", and "Theme For Kareem". CD also features 3 bonus alternate takes!  © 1996-2023, Dusty Groove, Inc.
(Out of print.)

Bundle Of Joy/Super Blue/Love Connection
Columbia/BGO (UK), 1977/1978/1979. Used 2 CDs
CD...$9.99
A triple-header from Freddie Hubbard – three late 70s albums together in a single set! Bundle Of Joy is a bundle of soul from Freddie Hubbard – one that has him blowing beautifully over full arrangements from Bert DeCoteux – the 70s super-soul maestro who really brings a new ... CD

Above & Beyond
Metropolitan, 1982. Used
CD...$9.99
A real treat for fans of Freddie Hubbard! The back cover has a quote from Freddie that says "This is my best playing on record" – and while we'll admit that we're still partial to some of his older studio work, we've got to admit that this live set from 1982 is an extremely ... CD

Goin' Up
Blue Note, 1961. Used
CD...$11.99
A real burner from Freddie Hubbard's early years at Blue Note – filled with rich hues, colors, and tones! The group's a quintet – supported by lyrical rhythms from the trio of McCoy Tyner on piano, Paul Chambers on bass, and Philly Joe Jones on drums – working alongside Freddie's ... CD

Sky Dive
CTI, 1972. Used
CD...$9.99
A killer set from Freddie Hubbard's legendary years on CTI! Like the classic Red Clay album, there's 4 tunes here, all longer cuts – where everyone gets a chance to stretch out a bit, over smooth (but not too smooth!) electric grooves, supported by great orchestrations from Don Sebesky! Ron ... CD

Hub-Tones (RVG remaster edition)
Blue Note, 1962. Used
CD...$9.99
An album with a classic modernist cover image – and one that's also got the same sort of sound to match – brilliant early work from trumpeter Freddie Hubbard, who's really coming into his own as a leader with this date! Freddie's really finding a voice here – a sharper edge than ... CD

Breaking Point! (RVG edition)
Blue Note, 1966. Used
CD...$14.99
Pivotal work from trumpeter Freddie Hubbard – a tight, edgy quintet performance that's done with a modern jazz sound that approaches the Blue Note "new thing" sound, but which stays just this side of the fence to keep in line with Freddie's other soulful work of the 60s – yet ... CD