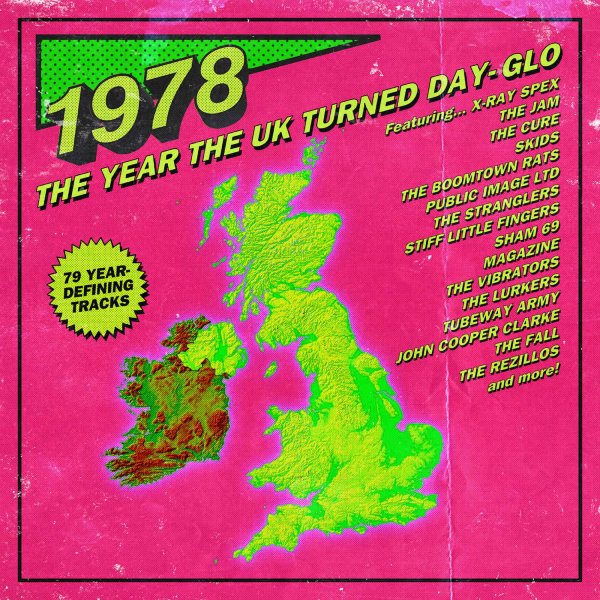 The title's maybe a bit misleading – as most folks think of day-glo as a color associated with some of the most throwaway culture of the 80s – but the brightness of the hue definitely marks the big explosion in styles during the key British year of 1978 – a time when the punk revolution of 1977 opened the door for a big range of modes to follow! It might be said that the post-punk years came immediately after the initial days of punk – and they definitely begin here, as hard and fast modes are mixed with more unusual styles that include mod revival moments, electronic experiments, and even some offbeat pop – expressions of humor, anger, and a shifting political landscape – served up as an amazing document of the creative intensity of the time! As with other Cherry Red boxes, the overall package is great – a huge amount of notes to support the 79 tracks within – a diverse array of music from Blue Steam, The Others, UK Subs, The Jam, Monochrome Set, Wreckless Eric, Spizzoil, Public Image Ltd, 999, The Stranglers, Japan, The Only Ones, Magazine, Alternative TV, Slush, Time Machine, Eater, The Bozos, Tyla Gang, Ed Banger, No Sweat, The VIPs, John Cooper Clarke, Scritti Politti, Penetration, Stiff Little Fingers, Alberto Y Los Trios Paranoias, Teardrops, Coventry Automatics, Menace, Bleach Boys, Jilted John, Zones, Electric Chairs, and many more!  © 1996-2020, Dusty Groove, Inc.