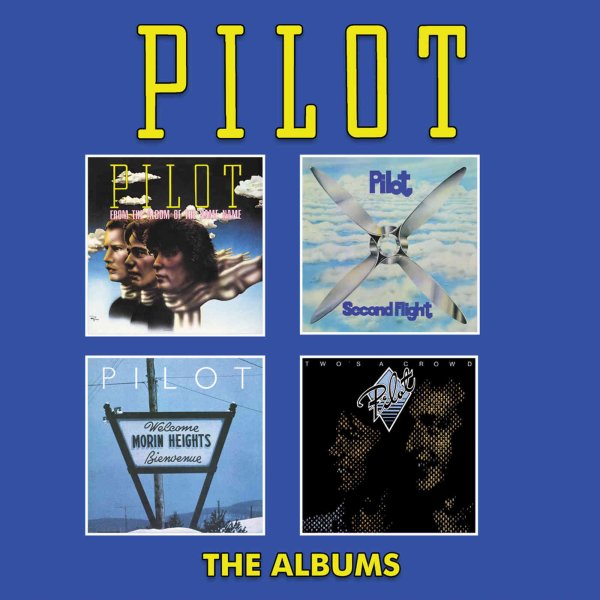 Sharp hooks, huge melodies, and 70s guitar pop greatness from Pilot – a genius pop group who only gave the world a handful of records, all of them pretty darn great! From The Album Of The Same Name includes their signature tune, "Magic" – and it's one of those songs everyone knows, whether or not they no who made it – but Pilot soars all around on these tunes. The guitars have punch, but the falsetto vocals are the main cabin of this vessel – and it's grand 70s soft rock of the first order! Other tracks include "Just A Smile", Lucky For Some", "Girl Next Door", "Sooner Or Later", "Never Give Up", "Sky Blue", "Never Give Up", and "Over The Moon". Second Flight is the excellent second album from Pilot, really perfecting the guitars, keyboards and vocals and hooks formula that shot them into the pop consciousness a year or so earlier – probably their best album ever! The opener "You're My No 1" is so catchy, we can hardly believe it's not a throwback pop radio staple, and the record has a few of tracks nearly as grand. The vocals & harmonies are better arranged, and the guitars and keyboards are in that great comfort zone between the glam pop of the previous couple years and the new wave pop to come. Somewhat silly bubble gum lyricism, sure, but it's tasty stuff! Other tracks include "January", "Love Is", "Call Me Round", "To You Alone", "Passion Piece", "Dear Artist" and more, plus the bonus demos "You're Devotion", "Love Is", "January" and "Lady Luck". Morin Heights is later work from 70s soft rock tunesmiths Pilot – a couple years on from their biggest hit, but still making gloriously catchy tunes! The hallmarks of their earlier stuff is here, with some twists & turns. The lyrics are the kind of lovestruck or lovelorn naivete that's cloying to some, and hopelessly endearing to others – relying more this time out and an overall catchiness than huge choruses and hummable singles. We'd fly with these guys anytime! Titles include "Hold On", "Canada", "First After Me", "Steps", "The Mover", "Penny In My Pocket", and "Maniac". Two's A Crowd is the last full 70s album from Pilot – just a duo by this point, but working with all the punch and panache of their early records! As before, their ability for hook-heavy tunes is amazing – as there's so many numbers here that could have been huge AM radio hits, but which also have some surprisingly thoughtful lyrical touches, and arrangements that are simple, but which really pack a hell of a punch. Titles include "Monday Tuesday", "Big Screen Kill", "Creeping Round At Midnight", "Library Door", and "Mr Do Or Die". CD features lots of related bonus tracks – including "Pamela", "Ra Ta Ta", "Just Let Me Be", "Maniac", "Us", "Lady Luck", "No Ties No Strings", "Are You In Love", "Just A Smile", and "Stop & Let Go".  © 1996-2021, Dusty Groove, Inc.

Venus
EMI/We Want Sounds (Switzerland), 1981. New Copy
CD...$7.99 (LP...$29.99)
A really beautiful record from the Japanese electro scene at the start of the 80s – a record that's got some of the catchy synth modes of the period, but which also has a fair bit of other elements going on too! Logic System features keyboards from Hideki Matsutake – best known for his ... CD