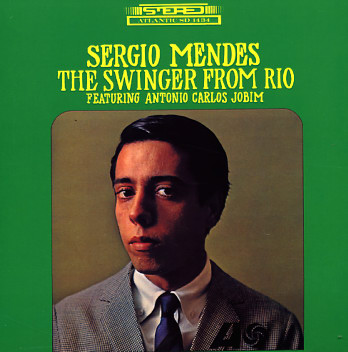 Sergio Mendes is definitely a swinger – especially on this jazz-based session that was recorded before his famous work with Brasil 66! This album was recorded in New York, at a time when Mendes was one of the hottest things brewing in the bossa scene in Brazil – and apart from the great Antonio Carlos Jobim on guitar, many of the other players are American jazz musicians – including Art Farmer on flugelhorn, Phil Woods on alto sax, and Hubert Laws on flute – all adding in some nice jazzy elements to the tunes! The music is all instrumental, and a great mix of jazz and bossa that really lets you hear the young Sergio's skills on piano. Titles include "Maria Moita", "Sambinha Bossa Nova", "The Dreamer", "Primavera", "Favela", and "Pau Brazil".  © 1996-2021, Dusty Groove, Inc.
(Limited green & yellow split color vinyl with obi!)

Clube Da Esquina (180 gram pressing)
EMI/Polysom (Brazil), 1972. New Copy 2LP Gatefold (reissue)
LP...$54.99 60.99 (CD)
A landmark album from Milton Nascimento – not only a set that really marked his growth as a singer, songwriter, and overall musical visionary – but also a record that really showcased the collaborative spirit that would be a part of his music for years to come! The album features ... LP, Vinyl record album