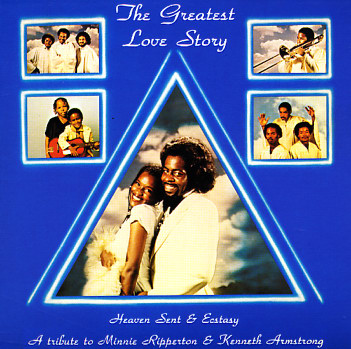 Heavenly soul from the start of the 80s – a sweet little indie set that's done as a tribute to Minnie Riperton and Kenneth Armstrong! The overall format doesn't have that much to do with Minnie, but the record's still pretty darn great – and the style is a mix of modern, mellow, and boogie – all served up with a real sense of earnestness that matches the cover of the album, and which makes the record stand strongly next to some of the bigger releases of the time. A number of tracks feature vocals by the lovely Pamela Morrison, and the group hails from the Oakland scene of the time – working here under the direction of Barbara J Trotter, who also wrote a good number of the titles on the set too. Titles include the dancefloor jammer "Sho Nuf Funky Beat", plus "We're Together Again", "I See Heaven", "Satisfaction To The Bone Nitty Gritty Naked Bone", "I'm A Lady", "Rapping With My Subconscious Mind", and "We're Together Again".  © 1996-2023, Dusty Groove, Inc.
(Beautiful Japanese pressing – heavy vinyl and obi!)