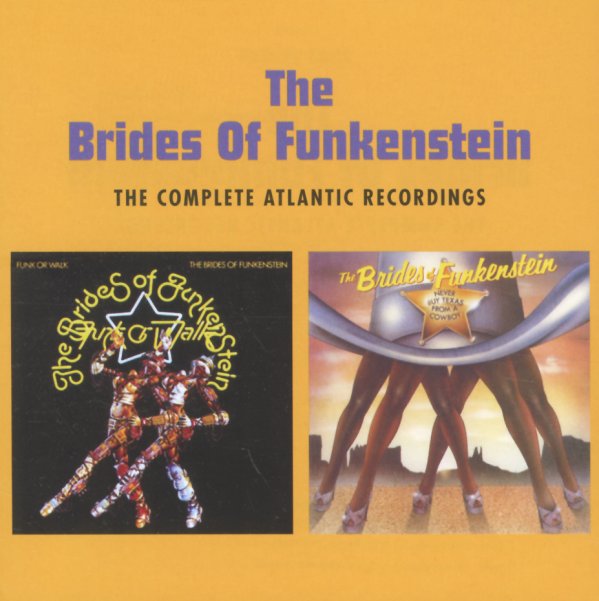 A prime pair of late 70s classics on Atlantic Records from Brides Of Funkenstein – a funky female group from the P-Funk empire – back-to-back with bonus tracks! The Brides are one of George Clinton's few girl-based projects of the 70s, and a group who are markedly more funk-based than Parlet! Vocals are by the duo of Lyn Mabry and Dawn Silva – but the main sound of the set comes from the tightly crafted rhythms served up by a cast of well-known P-Funk regulars – all hitting a spaciously snapping vibe that reminds us a lot of the best energy of late 70s Parliament albums on Casablanca! The tracks on Funk Or Walk, which is on Disc 1 here, are longish, but nicely focused – with less of the disco that you might expect, and more of a slow-stepping groove overall! Titles include "Disco To Go", "War Ship To Touchante", "Just Like You", "When You're Gone", "Amorous", "Nappy", and "Birdie". 2 bonus tracks: single mixes of "Amorous" and "War Ship Touchante". Never Buy Texas From A Cowboy is tremendously soulful session – with plenty of funky Clinton touches in the mix – including rumbling basslines, raspy guitars, and a tightly focused groove that has the singers working equally with the larger group of musicians on the record. Production is by Bootsy Collins and Clinton, with horn arrangements by Fred Wesley – which makes for some great Horny Horns funk touches on most tracks! The title cut – "Never Buy Texas From A Cowboy" – runs on as a long P-Funk groove for about 15 minutes, but other tracks are shorter, and titles include "I'm Holding You Responsible", "Smoke Signals", "Party Up In Here", and "Didn't Mean To Fall In Love". The 2 Part single version of the title track is here as a bonus track.  © 1996-2021, Dusty Groove, Inc.