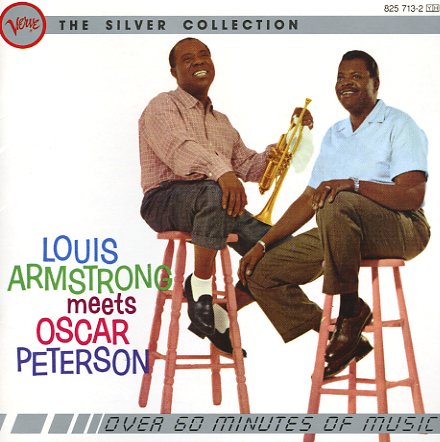 Gentle-going genius from the later years of Satchmo's career – a session that has Louis on trumpet and vocals, backed by the Oscar Peterson Trio! Peterson's usual group with Herb Ellis and Ray Brown is expanded slightly for this outing – bringing in Louis Bellson on drums to syncopate the tunes a bit more strongly, and give them that gently swinging rhythm that always works well with Armstrong's style. The real surprise, though, is Louis' voice – which is simple, almost elegant at times – and free from some of the gimmicks of other 50s sessions, or the too-playful style of his better-known duets of the period. We really love his gentle, honest approach to the lyrics here – on tunes that include "I'll Never Be The Same", "Moon Song", "What's New", "There's No You", "You Go To My Head", "That Old Feeling", and "Let's Fall In Love".  © 1996-2021, Dusty Groove, Inc.
(A beautiful pressing – part of the Acoustic Sounds series! Remastered 180 gram pressing – with tip-on sleeve.)