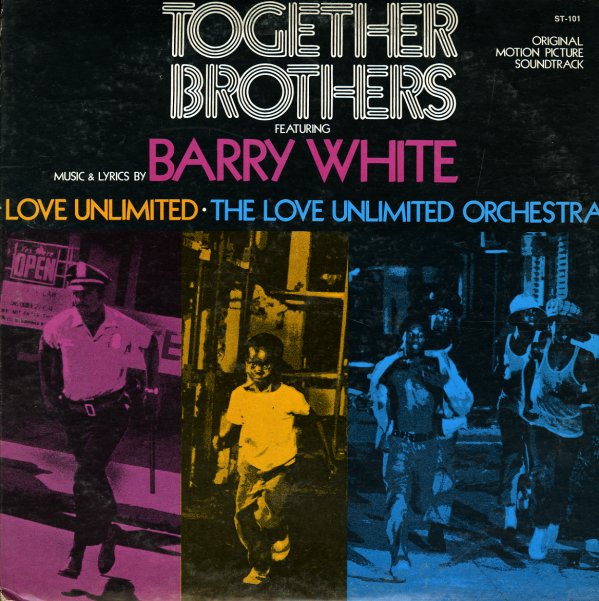 A stunner of a soundtrack from the maestro Barry White – his only entry into the blacksploitation film genre of the 70s, and a complete doozy throughout! For the album, Barry's stripped down the bigger space of his own records, and his Love Unlimited productions – into some shorter tracks that really focus on that blend of funk and strings that he could do so well – making for a batch of killer instrumentals that really offer up a special Barry White take on the funky film sound of the 70s! Love Unlimited also sing on two tracks – "Somebody Is Gonna Off The Man" and "People Of Tomorrow Are The Children Of Today _- but most of the record is instrumental, played by the Orchestra – and tracks include "Killer's Lullaby", "So Nice To Hear", "Killer Don't Do It", "Can't Seem To Find Him", "Alive & Well", "Theme From Together Brothers", "Do Drop In", and "Here Comes The Man".  © 1996-2021, Dusty Groove, Inc.
(Original pressing. Vinyl has marks that click on "The Rip" and "Stick Up". Cover has small seam splits.)

Ear Candy
20th Century, 1980. Very Good
LP...$2.99
A nice little loss leader, or promo sampler perhaps, put together in 1980 by 20th Century Fox records, Includes "What Cha Gonna Do With My Lovin'" by Stephanie Mills, 'Get Down" by Gene Chandler, "Don't Push It Don't Force It" by Leon Haywood, "Without Your Love" ... LP, Vinyl record album

Takes Guys & Dolls Disco
20th Century, 1976. Near Mint-
LP...$6.99
Al Capps arranged and conducted this disco record featuring songs from the soundtrack to Guys and Dolls. The notes on the back cover credit Capps for his "tasteful, happy, 'today' treatments of the much loved score". Songs include "A Bushel and a Peck", "Sit Down You're ... LP, Vinyl record album

Barbara Blake & The Uniques
20th Century, 1975. Near Mint-
LP...$19.99
An excellent album of Chicago soul – sung by one of the city's best underground groups! Barbara Blake got her start with The Duettes, and worked in a style that mixed sweet and hard styles, in a mode that was similar to early pre-Stax sides by The Emotions, or some of Denice Williams ... LP, Vinyl record album

White Gold
20th Century, 1974. Very Good+
LP...$9.99
A wonderful album of funky instrumental tracks from Barry White – often overlooked because of the "greatest hits" association you could make with the "gold" in the title. The record's got that perfect Love Unlimited sound – heavy beats underneath, and the orchestra ... LP, Vinyl record album

Is This Whatcha Wont?
20th Century, 1976. Very Good+
LP...$9.99
Kind of a confrontational title, but still an excellent batch of grooves from The Maestro, with heavenly production, and lots of long drawn-out sexy grooves. Cuts include "Don't Make Me Wait Too Long", "I'm Qualified To Satisfy You", "Your Love – So Good I Can't Take ... LP, Vinyl record album

Taste Of The Younghearts
20th Century, 1974. Very Good+
LP...$9.99
Standout work from The Younghearts – one of the best harmony soul groups of the 70s to record away from the east coast. The group's vocals are the strongest thing about the record – but they get a great extra push from Vernon Bullock, who produced and conducted the record with a nice ... LP, Vinyl record album