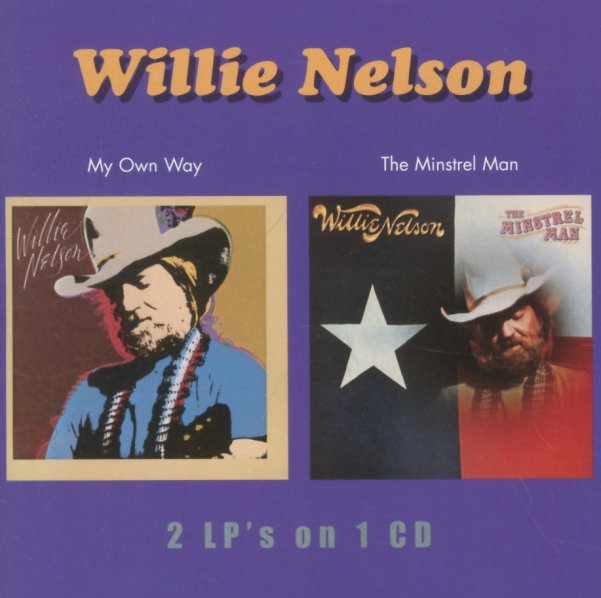 Two really great albums from Willie Nelson – back to back on a single CD! First up is My Own Way – a set issued at the height of his early 80s fame, with a picture from that time to match – but a record that actually features all these great overlooked sides from the tail end of Willie's years at RCA! If you don't know the RCA material from Nelson, it's totally great – and has this great quality that still makes all the best use of his vocals and songwriting skills, while also changing up the arrangements from the more popular Willie Nelson modes that broke big later on Columbia Records. Titles include a surprisingly powerful version of "Both Sides Now" – plus "I'm A Memory", "Rainy Day Blues", "Pins & Needles", "Stay Away From Lonely Places", "One In A Way", "Funny How Time Slips Away", and Willie's own version of "Hello Walls", with some great vocoder-like vocals through a guitar pickup! Minstrel Man has a picture of Willie Nelson from later years on the cover – but the set features some lost material from his earlier days on RCA – the kind of unusual tunes that really set Nelson apart from the pack, both as a singer and a songwriter! If you love Willie Nelson as much as we do, you'll know that there's so many great corners and overlooked chapters of his career to discover – and this album's definitely full of plenty of those – on titles that include "The Minstrel Man", "Mountain Dew", "Laying My Burdens Down", "Good Times", "Will You Remember", and "Senses".  © 1996-2020, Dusty Groove, Inc.

How Come The Sun (plus Tom Paxton EP)
Reprise/BGO (UK), 1971. New Copy
CD...$6.99
A great step forward for Tom Paxton – his first album on the Reprise label, and a set that really pushes the best post-folk modes of the singer! Tom's in this very dark setting here – still singing and playing acoustic guitar, but draped with these mature elements from a well-chosen ... CD