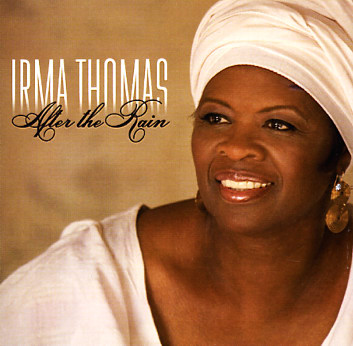 After The Rain (180 gram pressing)

A surprisingly nice set from Irma Thomas – recorded in a spare and stripped down way, but without any of the "too earnest" cliches that can sometimes mar other recent albums by classic soul stars! The feel here is almost gentle and easygoing at times – still in the powerful New Orleans-influenced mode of Thomas' roots, but never too forced or overdone – just rolling out with a warmth and confidence that shows that Irma doesn't have anything to prove to anyone! Production is by Scott Billington, who's worked with Thomas before – but he somehow seems to have gotten it more right here than before – and titles include "Stone Survivor", "Soul Of A Man", "Another Lonely Heart", "In The Middle Of It All", "Flowers", "I Count The Tears", "Shelter In The Rain", "Another Man Done Gone", and "Make Me A Pallet On Your Floor".  © 1996-2021, Dusty Groove, Inc.