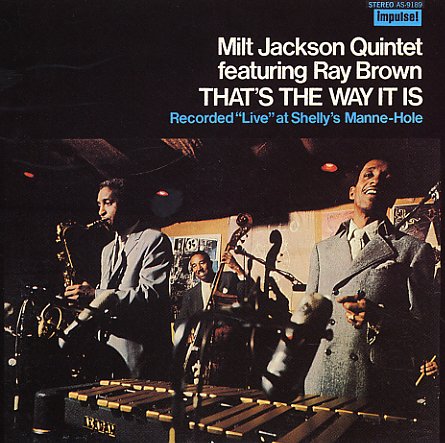 At the end of the 60s, Milt Jackson and Ray Brown cut some very groovy records together – teamed up in a great pairing of styles that pushed both of them way past the more standard sounds of earlier years! This album's one of the best of the bunch – as it features pianist Monty Alexander joining the pair, bringing in some warmly soulful elements on piano – in ways that are a great bridge between his work for MGM and MPS! The set also features great tenor from Teddy Edwards – blowing with a deep tone and a sharp edge – and in addition to vibes by Jackson and bass by Brown, the group also features Dick Berk on drums. The set was recorded live at Shelly's Manne-Hole – and titles include Alexander's "That's The Way It Is", plus "Blues In The Basement", "Wheelin & Dealin", and "Tenderly".  © 1996-2021, Dusty Groove, Inc.
(Part of the "Impulse – The Masterworks" series! UHQCD pressing.)