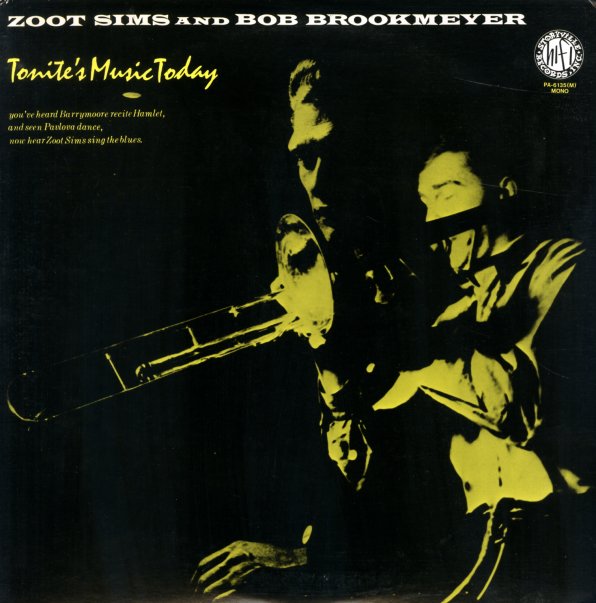 Two great Storyville sessions – back to back in a single set! First up is Tonite's Music Today – an early Storyville Records gem from these two budding modernists – featuring a quartet with Zoot Sims on tenor, Bob Brookmeyer on valve trombone, and Hank Jones on piano and a bit of celeste – a really fantastic group that cuts right to the core of the new ideas that Sims and Brookmeyer were exploring on their horns! Bob's got that sharp sound that really set his valve trombone work apart from the rest – maybe a bit more bite in his tone, too – which could be encouraged by Zoot's tenor, which is at its raspy best in this setting! The Storyville sessions by some artists often get eclipsed by more widely circulated discs on bigger labels – but this is essential early Zoot sims, and Brookmeyer's work is a nice bonus – on titles that include "Mr Moon", "The Chant", "Zoot's Tune", "How Long Has This Been Going On", "Bobby's Tune", and "Blues". Next is Whooeeee – a wonderful small combo set from this unusual team – put together in ways that are somewhere between the Bob Brookmeyer/Stan Getz pairings of the early 50s, and some of Zoot Sims' work for the Dawn label! Zoot's horn is maybe a bit sharper, and bolder than on his Dawn sides, though – that quality that really made him a favorite with hip listeners of the 50s, and which maybe even beats some of the Stan Getz work of the period – matched by Brookmeyer's impeccable work on valve trombone, which is more straightforward and swinging here than usual! The group also features Hank Jones on piano, Bill Crow on bass, and Jo Jones on drums – and titles include "The King", "Whoo-eeee", "Morning Fun", "Box Cars", and "Snake Eyes".  © 1996-2020, Dusty Groove, Inc.
(Very nice paper sleeve pressing!)