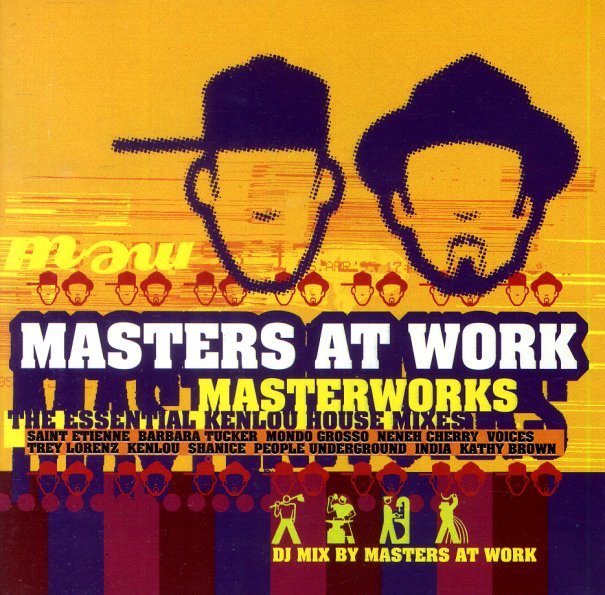 12 modern dancefloor cuts, all mixed by MAW with their beautiful deep anthemic club style! Titles include "Buddy X" by Neneh Cherry, "Voices In My Mind" by Voices, "The Bounce" by Kenlou, "I Like" by Shanice, "I Can't Get No Sleep" by MAW & India, "Only Love Can Break Your Heart" by St. Etienne, "Can't Play Around" by Kathy Brown, "Beautiful People" by Barbara Tucker, and more! Like having an instant party on one CD, and slammin' all the way through!  © 1996-2020, Dusty Groove, Inc.
(Out of print.)

House That Jackmaster Hater Built
Still Music, Late 80s/2014. Used 2CD
CD...$13.99
Rare tracks from the glory days of Chicago house – most of which were never issued at the time, mixed with current tracks that have a very vintage feel! The collection brings to light some real gems that certainly match – if not top – the best Chicago cuts, especially work from ... CD

Lord Have Mercy – The Soulful Gospel Of Checker Records
Playback, Late 60s/Early 70s. Used
CD...$9.99
A much-needed look at an under-exposed side of the legendary Chess Records – the label's incredible run of gospel records, most of which were every bit as great as their Chicago soul sessions! This package is the first to really dig into that rich history – and has a wonderful focus on ... CD

Machine Soul – An Odyssey Into Electronic Dance Music
Rhino, 1970s/1980s/1990s. Used 2 CDs
CD...$8.99
A very cool 2CD set that traces the roots of electronic dance music – beginning with a dip into the heady world of 70s club tunes and punk-era experimentation, then moving up into the years of pop house hits, and modern electronica grooves. There's a total of 28 cuts in all, all packaged in ... CD

Up! The Psycho Mellow – A Brief Excursion Into The 70's Sound
Schema (Italy), Early 70s. Used
CD...$9.99 (CD...$12.99)
Stunning compilation of Italian grooves from the early 70's – and one that has a slightly different twist than some of the other one's we've been stocking. The folks at Schema have put this one together, and the set's got a feel that's similar to some of the newer releases they've been ... CD

Don't Stop – Recording Tap
Numero, Early 80s. Used
CD...$5.99 (CD...$7.99)
Not much of a cover photo, but one of the most amazing collections so far from the Numero Group – a richly archival project that finally brings to light the lost efforts of the short lived Tap Records label! Tap was the brainchild of Jeremiah Yisrael – an ambitious producer, and ... CD

Psych Funk 101 – A Global Psychedelic Curriculum 1968 to 1975
World Psychedelic Classics, Late 60s/1970s. Used
CD...$6.99 (CD...$7.99)
A stunner of a collection of psychedelic funk from all over the world – incredible material with the spiraling atmosphere and free spirit of the psychedelic scene – and the furious sense of groove learned from the funk movement! Psych Funk 101 sets out to be a definitive overview, and ... CD