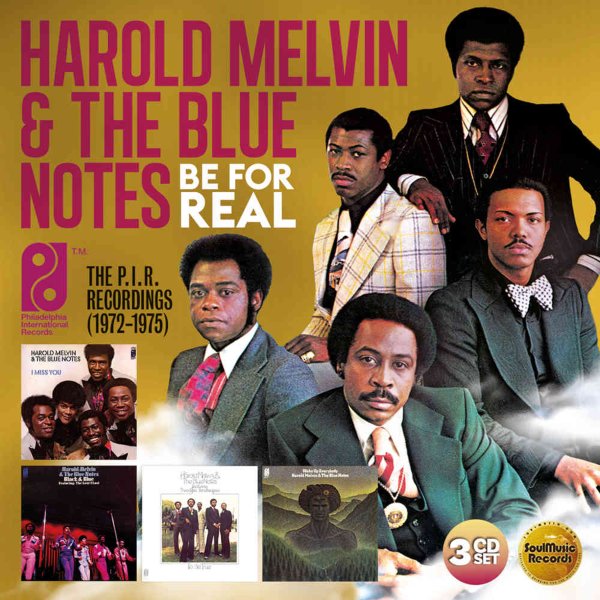 A fantastic collection – four classic Philly International albums from this legendary group – plus a CD of bonus material too! First up is I Miss You – a groundbreaking record that forever changed the course for male soul music in the 70s – a set that has the young Teddy Pendergrass fronting the Blue Notes with a sound that's completely sublime – a mix of rough and smooth, personal and polished – which really pushed the music forward strongly for generations! The strength of the record really comes through in these amazing long tracks that have Teddy speaking, then singing – "I Miss You" and "Be For Real" – delivering a message of mature, masculine power – very much in keeping with the new values that Philly International were putting forth. The whole album's great, though – a sophisticated soul masterpiece, with the tracks "Ebony Woman", "Yesterday I Had The Blues", and "Let It Be You". Next is Black & Blue – a killer batch of studio tracks, despite the live image of the group on the cover! The album's got a slightly more expansive feel than some of the other Teddy Pendergrass-era albums by The Blue Notes – almost a mini-symphony of soul, and one that takes arrangements from Bobby Martin, Norman Harris, and Vince Montana – and wraps the vocals up in a soaring, righteous sort of feel! The rougher, more personal Teddy Pendergrass style of I Miss You is folded a bit more into the harmonies of the rest of the group here – and the result is a powerful wave of soul that pushes The Blue Notes right to the top of the pack. The album features classics like "The Love I Lost" and "Is There A Place For Me" – plus other nice material like "Concentrate On Me", "It All Depends On You", and "I'm Weak For You". To Be True is one of the legendary classics from the Philly International years of Harold Melvin & The Blue Notes – a time when the group was featuring the tremendous lead vocals of the great Teddy Pendergrass! The set's a stunner all the way through – one of the best Philly mixes of smooth, professional backings and deeply personal lyrics – as Teddy soars to the top of the mix with his excellent leads, and gets excellent support from the rest of the Blue Notes on harmonies – but also steps aside to make a bit of space to introduce singer Sharon Paige on one cut, who'd have a greater role in the group in years to come. The songwriting, production, and other Sigma Studios touches are sublime – and titles include "Hope That We Can Get Together Soon", "Where Are All My Friends", "Bad Luck", "To Be True", "Nobody Could Take Your Place", and "All Because Of A Woman". On Wake Up Everybody, Teddy Pendergrass and crew get a bit more political than on earlier releases, and adopt the righteous bubbling soul groove that had put the O'Jays over the top a few years earlier – with incredible results! The title cut – "Wake Up Everybody" – would prove to be a great example of the political Philly International hit formula applied to socially conscious themes, but the record probably scored even bigger with the club crossover hit "Don't Leave Me This Way". Other tracks include "Keep On Lovin You", "Tell The World How I Feel About Cha Baby", "I'm Searching For A Love", and "You Know How To Make Me Feel So Good" – the latter two of which also feature female vocals by Sharon Paige. Bobby Martin, Norman Harris, and Ronnie Baker did the arrangements – and this was Teddy's last LP with the group. CD3 features bonus tracks – some of them nice and long – titles that include "I Miss You (live)", "Everybody's Talkin", "Bad Luck (Tom Moulton mix)", "Don't Leave Me This Way (Tom Moulton mix)", "The Love I Lost (live)", and "If You Don't Know Me By Now (live)".  © 1996-2021, Dusty Groove, Inc.