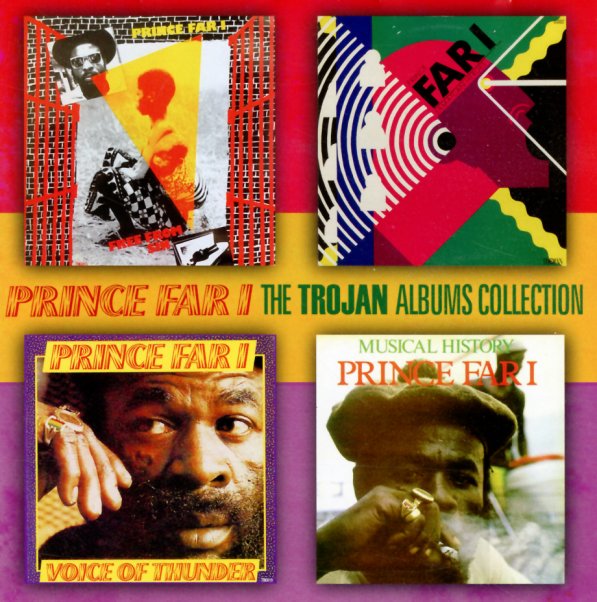 Four fantastic albums from the legendary Prince Far I! The set begins with the classic Free From Sin – Great early work from Prince Far I – a stunning mix of reggae and dub, with a righteous quality that really gives the prince his title amongst 70s Jamaican royalty! Backing is by a version of the Roots Radics – with the excellent Style Scott on drums, Errol Holt on Bass, Bingy Bunny, Sowell and Chinna Smith on guitar, Bobby Kalphat and Snappin on keys, Bobby Ellis and Deadly Headly on horns, and Bongo Herman and Ras Millinek on percussion – but the real key to the sound is the way that Prince Far I produces the whole thing, and mixes his own sinister vocals with the heady, bottom-heavy rhythms – all with a quality that matches Lee Scratch Perry at his best! Titles include "Free From Sin", "Light Of Fire", "Reggae Music", "I & I Are the Chosen One", "Don't Deal With Folly", "Call On I In Trouble", "When Jah Ready You Got To Move", and "Siren". Jamaican Heroes is a totally great album by Prince Far I – and a set that already shows him building that crucial London/Kingston bridge that would be such a big part of his sound! The album features work from Sly & Robbie, and the killer drums of Style Scott on rhythm – but also includes contributions by London hipsters Viv Albertine & Ari Up (of the Slits), and David Toop (noted music writer and historian) – quite a mix, and all brought together wonderfully by the Prince's production, and really unique vocal approach. Titles include "Jamaican Heroes", "Prison Discipline", "Musical History", "Natty Champion", and "Golden Throne". Next up is a classic from Prince Far I – Voice Of Thunder couldn't be a more appropriate album title or moniker! Recorded at Channel One in 1981 with incredible analog dub production, it fully carries the grit, murk, heavy and heady soul of the 70s into the new decade –even if the sound is ultimately a bit different then the what he delivered in the 70s. That thunderous voice toasting over the rhythms is as incredible as ever – over the commanding bass of Professor Larry Silvera, tripped out drums & percussion by Jah Lloyd & Scully, occasional swirling keys by Steely, Tarzan and Tony Asher and the other great Channel One players. Titles include "Ten Commandments", "Every Time I Hear The Word", "Head Of The Buccaneer", "Shall Not Dwell In Wickedness", "Skinhead", and "Hold The Fort". Musical History is one of the last albums ever issued by Prince Far I – and a set that marks a fantastic cap to a too-short career! The Prince's vocal contributions are as impeccable as his dubby production work – and titles include "At The Cross", "More We Are Together", "Take Heed Frontline", "What You Gonna Do On Judgement Day", and "Tell Them About Jah Love".  © 1996-2021, Dusty Groove, Inc.