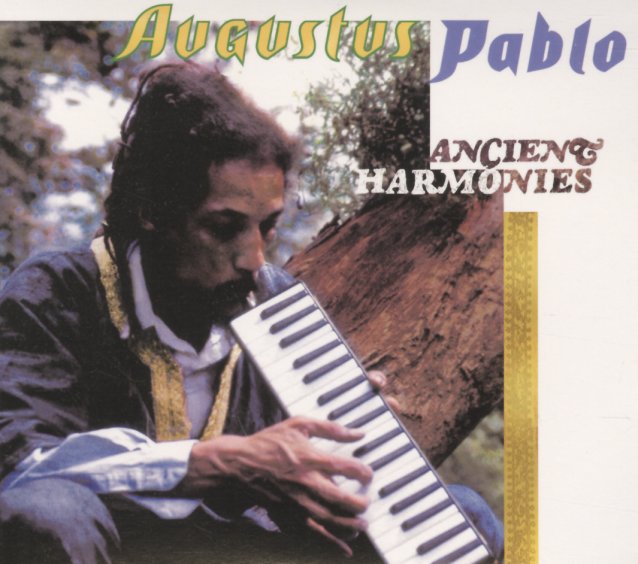 Four 80s albums from the mighty Augustus Pablo – served up here in a special 2CD set! First up is Blowing With The Wind – seminal 80s work from Augustus Pablo – a set that's maybe got a bit more digital and electronic touches in the mix, but which still maintains that fantastic mix of dub and melodica that made the man so unique! The tunes have very righteous rhythms at the core, and a bit of keyboards mixed in with Pablo's lead – and maybe a few spacey touches around the edges that come off in a really great way! Augustus handles all the keyboards, arrangements, and production – and titles include "Twinkling Star", "Creation Blues", "Zion UFO", "Drums To The King", "First World Call", "This Song", "Twenty One Years Later", and "Ancient Harmonies". Rockers Come East is a sweet digital set from Augustus Pablo – a mid 80s set that has him mixing his melodica with other keyboard work on Casio and Yamaha – both instruments that are used with the otherworldly, snakey groove that makes Pablo so great! The rhythms are maybe slightly more 80s, too, but still very spare and stripped down – and Phillip Smart helps on the mix, while Clive Brown and Squidley provide some drumulation. Titles include "Pablo Meets P Smart In LI", "Progression Dub", "Revelino Dub", "Babylon Loosing Dub", "Sun Ray Dub", "Jah D Special", "Rockers Come East", Dubbing The Oppressors", and "Zion Seals Dub". One Step Dub is dubby genius from the great Augustus Pablo – a set that continues the spirit of his best 70s work in this mode, but with a sound that has a few slight 80s touches! The overall sound is still very nice and spare – laidback, gently tripping in the rhythm department, and with both melodica solos from Pablo – and some other keyboard work that really echoes the moody, spacey, snakey sound of his work on the blown instrument! The title names are a bit basic, but that hardly matters, given the sound of the set – and tracks include "Riot Dub", "In The Red Dub", "Hanging Dub", "Night Patrol Dub", "Rastaman Dub", "Zion Way Dub", and "Dubbing King James". Rising Sun is fantastic work from Augustus Pablo – and a great demonstration of the way that the best of the classic 70s Jamaican artists were able to shift their styles slightly during the 80s, but still come up with a sound that was every bit as great! There's more digital elements here than before – especially in the crackle of some of the rhythms – but in ways that are right around the edges, and which echo the sort of effects that might have been cooked up by tape in the studio – used here to bring a nice bite to the mix of melodica and melodica like keyboard lines from Pablo! Mixes are by Scientist – and titles include "Dub Wiser", "Rising Sun", "Fire Red", "Jah Wind", "Pipers Of Zion", and "African Frontline".  © 1996-2022, Dusty Groove, Inc.