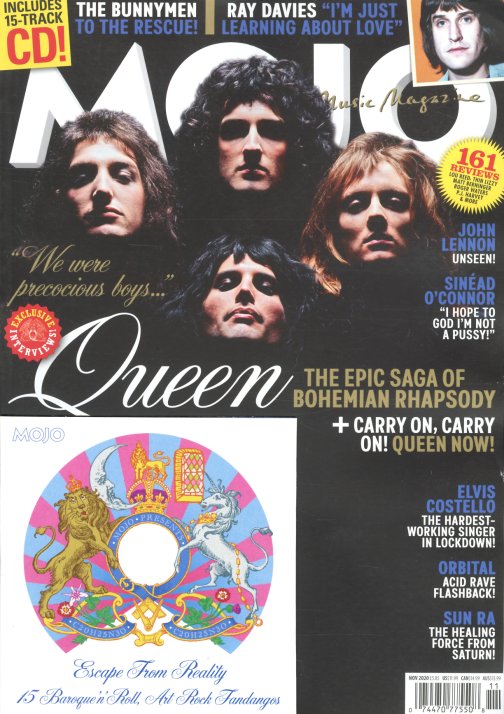 Queen's on the cover, and the issue looks at the making of their masterpiece "Bohemian Rhapsody" – and also examines the current goings-on of the group! There's also features on Elvis Costello, Sun Ra, Orbital, John Lennon, Sinead O'Connor, Echo & The Bunnymen, and Ray Davis – all served up with the usual Mojo panache and verve! And as usual, there's a huge number of reviews – over 150 new releases, with lots of information to keep your record collection fresh – plus a bonus 15 track CD, filled with tracks by Sparks, Todd Rundgren, XTC, Rufus Wainwright, Motorpsycho, Wild Beasts, Os Mutantes, and others.  © 1996-2020, Dusty Groove, Inc.

Issue 76
Vive Le Rock (UK), 2020. New Copy
Magazine...$13.99
This issue's got a big look at the 3LP Sandinista masterpiece by The Clash – plus a look at the punk explosion in Northern Ireland – and more on Adam & The Ants, Toots Hibbert, Ian Dury, Sigue Sigue Sputnik, Danse Society, and The Boys – all done up in the best 80s mode of the ... Magazine

Issue 325 – December 2020 (with bonus CD)
Mojo, 2020. New Copy
Magazine...$11.99
The cover feature's a long look back at fifty five years of music from the mighty Bob Dylan – in an issue that also features big articles on Robby Krieger, John Lydon, Wilco, Toots Hibbert, Run The Jewels, and Radiohead – all done in the deep detail we've come to expect from Mojo! The ... Magazine

Issue 110
Shindig, 2020. New Copy
Magazine...$10.99 12.99
This issue's got a big cover feature on King Crimson – a look at their crowning year of 1969, along with an interview with founding members Ian McDonald and Michael Giles! There's lots more too – including a look at the groundbreaking Parachute album from Pretty Things, funky poet ... Magazine

Issue 55 – Winter 2020
Ugly Things, 2020. New Copy
Magazine...$8.99
Another great entry in the always-rich musical world of Ugly Things – a publication so jam-packed, it usually takes us five times longer to read than any other music magazine! This time around, the issue features a long interview with Bun E Carlos of Cheap Trick fame – plus a look at ... Magazine