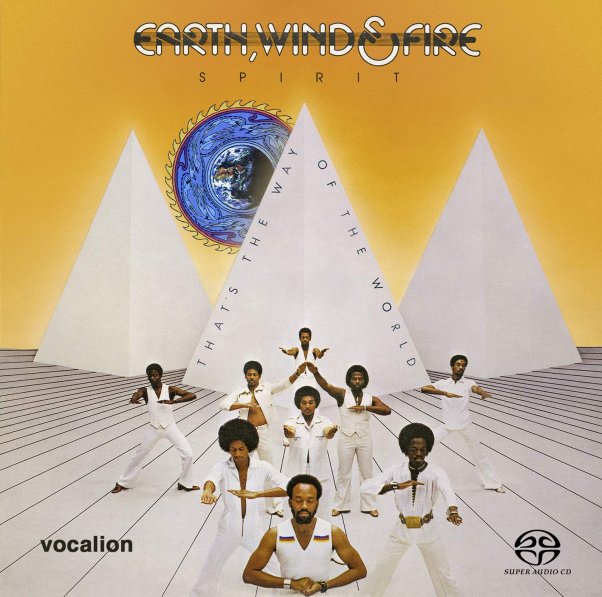 Spirit/That's The Way Of The World (SACD multi-channel disc)

A pair of classics from Earth Wind & Fire – back to back on a single CD! First up is Spirit – a big hit for the group – and a great album of smooth funky soul! Spirit is a perfect example of the way that Earth Wind & Fire could tighten things up, yet still keep them real – holding onto the deeply spiritual side that first made them great – but also focusing their energy towards a wider audience that showed their influence for years! Of course, with Charles Stepney helping out on production, it's hard to miss – and he's one of the few cats who could handle a blend like this so well. The compression in the band's playing is impeccable – with just the right mix of spacey spiritualism, sophisticated jazzy playing, and a straight ahead love of the soulful hook. Includes the instrumentals "Biyo" and "Departure", plus the vocal tracks "Earth Wind & Fire","Burnin Bush", "Spirit", "Imagination", and "Getaway", all produced to perfection by Maurice White and Charles Stepney! That's The Way Of The World may be Earth Wind & Fire's ultimate moment of the 70s – and a perfect blending of all their influences that stands as a lasting tribute to their super-huge effect on soul music! The record features all aspects of the band coming into perfect cohesion – bassy funk, mellow soul, and Afrocentric jazz – all expertly handled by the great Charles Stepney, who still has the same rich talent for blending styles that he had while working at Chess/Cadet during the glory days of the late 60s. Some of these songs have been played to death (and covered so much) over the years that it's often easy to forget what a crowning moment this was for former underground soul heroes Earth, Wind & Fire – but we'll never cease to be amazed at the power of their mid-70s work, and this album's the best of the best. Titles include "Shining Star", "That's The Way Of The World", "Reasons", "Africano", "See The Light", and "Happy Feelin".  © 1996-2021, Dusty Groove, Inc.
(Hybrid Super Audio CD pressing – also works on standard CD players!)