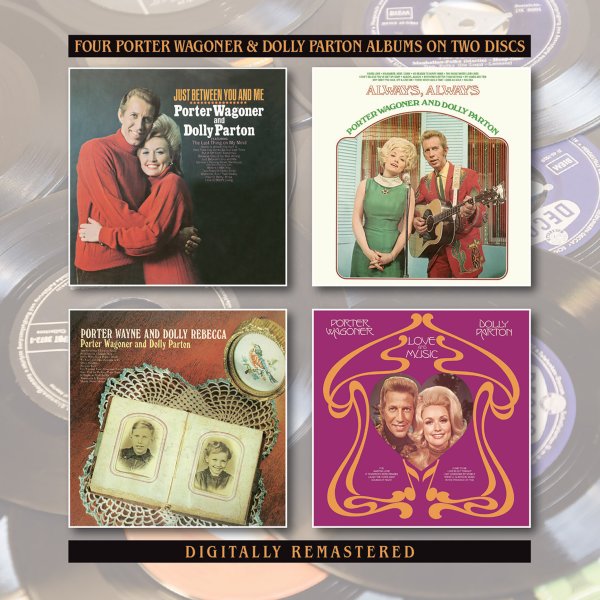 Four full albums from this legendary pair – packed together in a single 2CD set! First up is Just Between You & Me – a fantastic early album in the pairing of Porter Wagoner and Dolly Parton – a duo who really took the country duo style into fantastic territory with records like this! Dolly actually wrote a number of the album's best cuts, and her strong vocals really seem to push Porter even more than on his own records – an odd pairing, but one that works beautifully throughout! Titles include the heartbreaking alcoholic tale "Mommie Ain't That Daddy" – plus "Because One Of Us Is Wrong", "The Last Thing On My Mind", "Two Sides To Every Story", and "Put It Off Until Tomorrow". Always Always is a gem through and through – the kind of record that really stands testament to the strength of the pair! Porter Wagoner and Dolly Parton were always way more than just another country duo coming together as a gimmick – as both singers have so much to offer, they really make a hell of a lot of magic when they work together on albums like this! The set kicks off with the totally great rave up "Milwaukee, Here I Come" – and segues nicely into classic honky tonk duets mode, the polished Nashville Sound, and oddball Porter recitations – on gems that include "Yours Love", "Malena", "Why Don't You Haul Off And Love Me", "Always, Always", "No Reason To Hurry Home", "The House Where Love Lives", "Good As Gold", and "Anything's Better Than Nothing". Porter Wayne & Dolly Rebecca is an album that continues one of the best themes of the Parton/Wagoner pairing – its way of using Dolly's youthful songwriting as a great way to help keep Porter's music relevant – in a record of heartbreaking tunes that go way way past the usual country duo style! Titles include "Run That By Me One More Time", "Tomorrow Is Forever", "Silver Sandals", "Mendy Never Sleeps", "We Can't Let This Happen To Us", "No Love Left", and "I'm Wasting Your Time & You're Wasting Mine". Love & Music is a record that has the Porter Wagoner/Dolly Parton team still sounding great in an RCA 60s sort of way – maybe modes that the pair could continue to do so well, even though some of their labelmates were moving off into other directions. There's loads of great cuts on the record by both Porter and Dolly – and they trade leads and come together vocally in ways that are still head and shoulders above most other country music male/female pairs – on "Sounds Of The Night", "Laugh The Years Away", "If Teardrops Were Pennies", "Love Is Out Tonight", "You", "There'll Always Be Music", and "In The Presence Of You".  © 1996-2021, Dusty Groove, Inc.