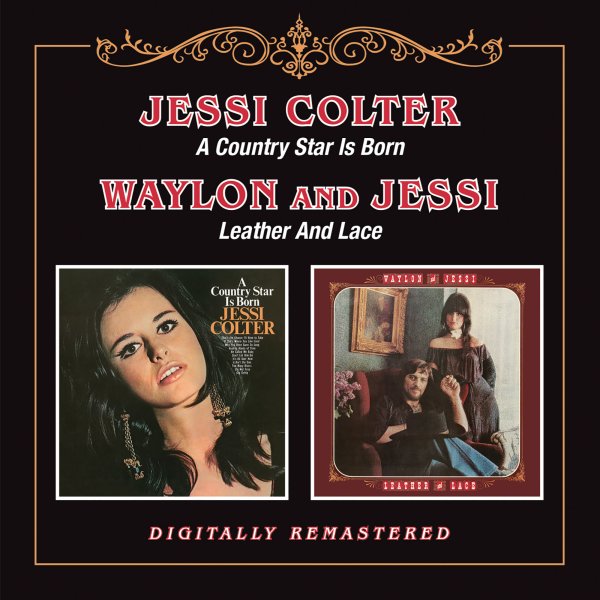 The first-ever album from Jessi Colter – paired here with a famous duet set with husband Waylon Jennings! First up is A Country Star Is Born – the fantastic debut of Jessi Colter – done at a time when the lady had already hitched up with Waylon Jennings at a personal level, and was also sharing some of his nascent outlaw qualities in her music! In fact, we might make an argument that this album predates some of Jennings' bigger outlaw moments – and also has a similar sort of quality in the early years – with qualities in Colter's voice that are very different than the Nashville mainstream, almost as if she's equally aware of phrasing from female folk singers – set to a very hip batch of tunes from Colter herself (as Miriam Eddy), Harlan Howard, Willie Nelson, and Mickey Newbury. The set includes a duet with Waylon Jennings on "I Ain't The One" – and other titles include "It's Not Easy", "He Called Me Baby", "Too Many Rivers", "Cry Softly", and "If She's Where You Like Livin". Leather & Lace is the first full album of duets between Jessi Colter and Waylon Jennings – two romantic partners who'd been crossing paths on records a few times during the 70s, and finally got the chance to step out in an album of their own! The approach is a bit like some of the other RCA pairings of stars during the 70s, in that sometimes Waylon is mostly in the lead, sometimes Jessi – but you can definitely hear the sympathy that both feel for each other, and the album's most special moments really come when they share the lead together. Titles include "Pastels & Harmony", "You Never Can Tell", "Rainy Seasons", "I'll Be Alright", "You're Not My Same Sweet Baby", "Storms Never Last", and "What's Happened To Blue Eyes".  © 1996-2021, Dusty Groove, Inc.