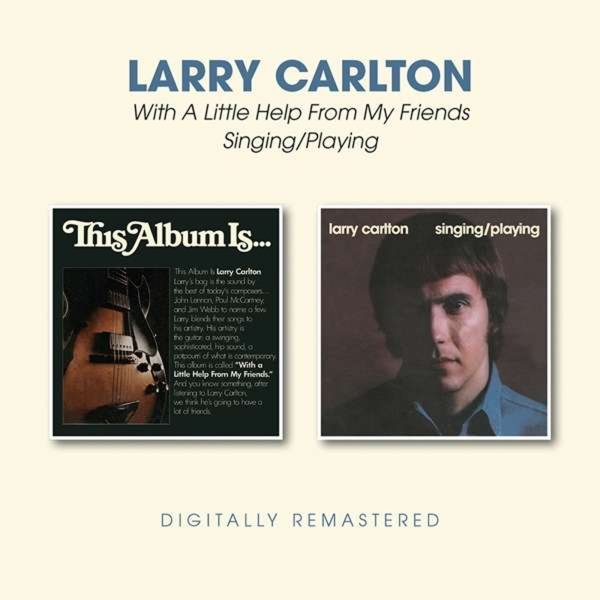 Two early gems from guitarist Larry Carlton – back to back on a single CD! First up is the Uni album With A Little Help From My Friends – pre-fusion, and done at a time when a whole generation of guitarists were trying to find a way forward – and experimenting in a number of different formats! The vibe here is maybe like some of the Wes Montgomery or George Benson Verve or CTI records of the late 60s – really chromatic guitar lines that carve out a beautiful lead over some arrangements that are fuller than a combo, but never overdone – arranged by Foster Wakefield, who we don't know at all – but with the tasteful spaciousness of a Claus Ogerman or a Don Sebesky! Larry sounds great on the record – really working out some lines that are quite different than a jazz guitarist might have sounded a few years before – and strongly pointing the way to his future. Titles include "With A Little Help From My Friends", "Don't You Care", "Mac Arthur Park", "Odd Couple", "Eleanor Rigby", and "Monday Monday". Next is Singing/Playing, and the title's no lie – as Larry Carlton steps out in a warmly-produced session that's got a really sweet LA studio vibe – one that mixes together early fusion backings and compressed vocalizations – in a way that maybe makes the whole thing feel like an overlooked A&M Records gem from the Nick DeCaro years! Larry's got this easygoing vocal style that's very down to earth, and set up in these sweet arrangements directed by Stewart Levine – soulful, jazzy, and with occasional currents of funk – and with some great keyboard touches from MIchael Omartin next to Larry's guitar and vocals. Titles include the great "American Family", plus "Wavin & Smilin", "Easy Evil", "Free Way", "Captain Captain", and "With Respect To Coltrane".  © 1996-2021, Dusty Groove, Inc.