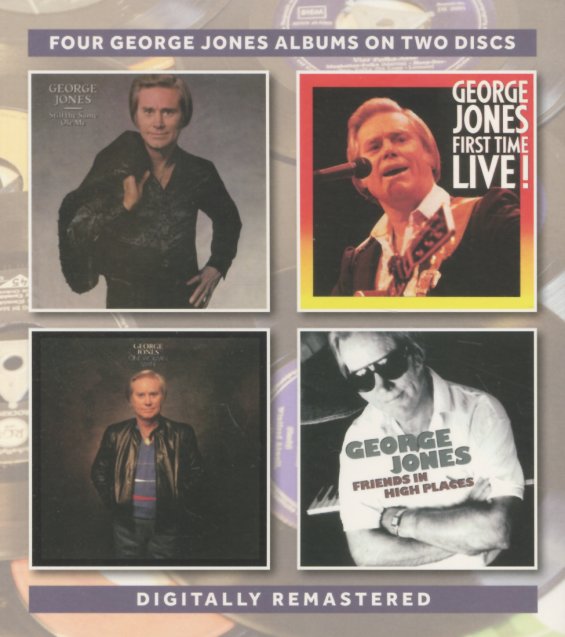 Four later albums from the great George Jones – packed together in a 2CD set! First up is Still The Same Ole Me – and on the set, George Jones is still definitely the same old me – even if his voice has aged and changed over the years! The album's got some great songs that really hit the more heartbreaking side of the Jones spectrum – which was always his best in later years – and titles include "Couldn't Love Have Picked A Better Time To Die", "Daddy Come Home", "Good Ones & Bad Ones", "You Can't Get The Hell Out Of Texas", "Same Ole Me", and "Together Alone". First Time Live is maybe one of the best George Jones albums of the 80s – a live set, and one that's got this easygoing charm that really holds the whole thing together! Backings are by The Jones Boys, who work perfectly with George – giving him support that feels relaxed and more spontaneous than some of his studio work of the time. Titles include "Tennessee Whiskey", "Fox On The Run", "I'm Not Ready Yet", "Who's Gonna Chop My Baby's Kindling", and "He Stopped Loving Her Today". One Woman Man is an overlooked gem from the end of the 80s – a set that has George hitting some of the vocal moments of his 70s classics, in a mix of tunes that really open up his charms. Titles include "I'm A One Woman Man", "Don't You Ever Get Tired", "Burning Bridges", "Pretty Little Lady From Beaumont Texas", "A Place In The Country", and "Just Out Of Reach". Friends In High Places is a set of duets with some of George's contemporaries, and a whole host of younger talents he inspired – a lineup of guests that includes Shelby Lynne, Emmylou Harris, Randy Travis, Vern Gosdin, Tim Mensy, Ricky Scaggs, and others – on titles that include "A Few Ole Country Boys", "Love's Gonna Live Here", "If I Could Bottle This Up", "I've Been There", "It Hurts As Much In Texas", and "You Can't Do Wrong & Get By".  © 1996-2021, Dusty Groove, Inc.