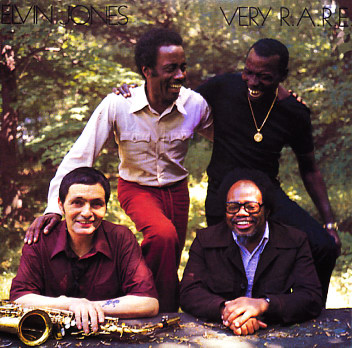 Very rare indeed – and one of the best 70s albums from Elvin Jones – thanks to a tight quartet lineup who follow his every move with tremendous energy! The style's not as all-out bombastic as Jones could sometimes be in these days – and with a group that includes Roland Hanna on piano, Art Pepper on sax, and Richard Davis on bass, Elvin's in company that allows him to be strongly expressive on both sides of the spectrum! Sure, there's a few searching, soaring numbers that show Elvin's Coltrane roots – but there's also some gentler more introspective moments too, ones that provide great space for solos from Hanna and Pepper. Titles include "Witching Hour", "Pitter Pat", "Tin Tin Deo", "Zange", "Sweet Mama", and "Passion Flower".  © 1996-2021, Dusty Groove, Inc.
(Part of the Jazz Legends In Japan series!)