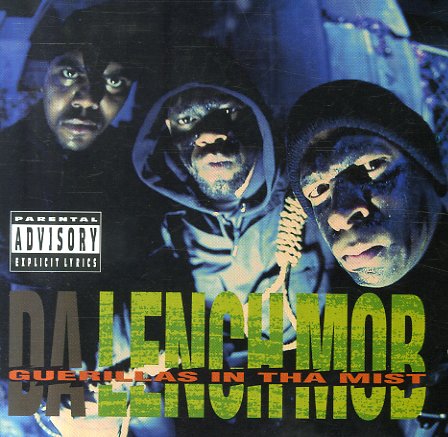 The proper full length debut of Da Lench Mob – following up their crucial backup role on Ice Cube's classic AmeriKKKa's Most Wanted – stepping out pretty strongly here on their own! Ice Cube's voice pops in and out, but for the most part settles into production and has songwriting role here – this is is definitely the T-Bone, J-Dee and Shorty show – with heavy headnodding funk beats and street smart rhymes that make it fitting spinoff and spiritual successor to AmeriKKKa's Most Wanted. Includes "Buck Tha Devil", "Lost In Tha System", "Guerillas In The Mist", "Freedom Got An AK", "Inside Tha Head of a Black Man", "Lord Have Mercy" and more.  © 1996-2021, Dusty Groove, Inc.
(Limited edition green & orange splattered vinyl pressing!)