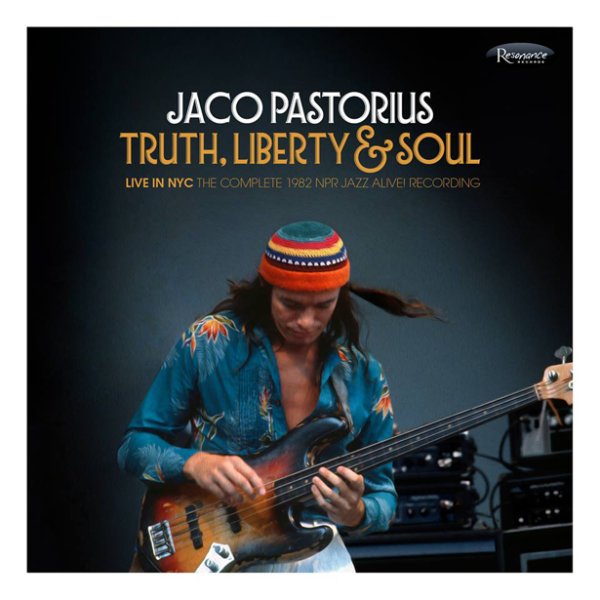 A famous broadcast performance by this legendary bassist – but one that's presented here in a version that features 40 minutes of music that never aired on the original program! This well-recorded set captures Jaco Pastorius at his height – after a huge step forward in sound and style in the 70s – to a time when he was exploring so many new ideas, and new ways of expressing himself on the electric bass – an instrument that he completely transformed for generations to come! The group's a large one – Jaco's Word Of Mouth ensemble – with Bob Mintzer on tenor and soprano sax, Randy Brecker on trumpet, Peter Erskine on drums, and Don Alias on percussion – plus Othello Molineaux on some mighty cool steel drums. There's a larger horn section, too – and Toots Theielmans plays a bit of guest harmonica – and most tracks are nice and long. Titles include "Okonkole Y Trompa", "Three Views Of A Secret", "Invitation", "Soul Intro/The Chicken", "Twins", "Bass & Drum Improvisation", "Reza/Giant Steps", and "Mr Fonebone".  © 1996-2022, Dusty Groove, Inc.

Not Fusion But True Jazz
Sony (Japan), 1970s. Used
CD...$9.99
The title's a bit misleading, as the music here is still pretty much on the fusion side – but that's OK with us, as bassist Jaco Pastorius was one of the folks who helped invent the style back at the start of the 70s! This set's a compelling collection of work that Pastorius recorded in a ... CD

Modern American Music – Period – The Criteria Tapes
Omnivore, 1974. Used
CD...$9.99
Some of the earliest work ever from Jaco Pastorius – rare demo recordings, issued in this format for the first time ever – filled to the brim with the kind of groundbreaking basswork that Jaco helped pioneer! Many tracks are relatively spare, and really give you a great chance to hear ... CD

Jaco Pastorius (Japanese Blu-spec CD pressing)
Epic (Japan), 1976. Used
CD...$24.99
This is the one that really nailed it for Jaco Pastorious – a brilliant showcase for all his many talents on the bass, and a key illustration of the way that he influenced an entire generation! Sure, Jaco in Weather Report was already pretty darn great – but here, on his own, he really ... CD

In Harmony
Resonance, 2007. Used 2 CDs
CD...$18.99
A set of unreleased duets between trumpeter Roy Hargrove and pianist Mulgrew Miller – two players who are definitely in harmony throughout the recording! Most tracks are nice and long – taken with an open, lyrical sensibility – one that's driven strongly by Miller's sense of ... CD

Some Other Time – The Lost Session From The Black Forest
Resonance, 1968. Used 2 CDs
CD...$14.99
Never-heard studio work from the great Bill Evans – not another one of those many (and great) live performances from overseas – but a well-conceived, beautifully recorded set of tracks that were done for MPS Records in their famous studios in the Black Forest! The group here is Evans ... CD