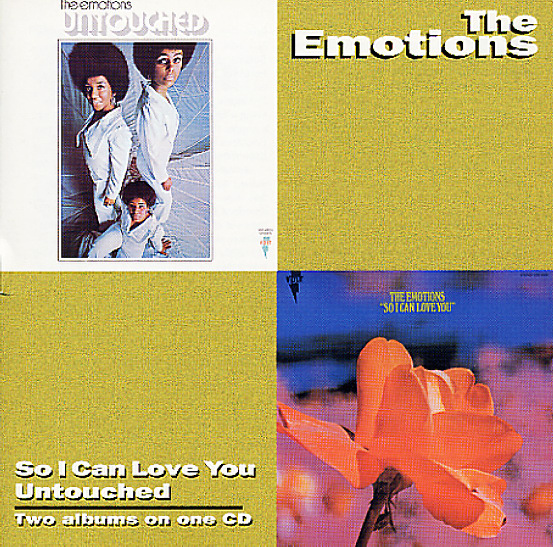 So I Can Love You/Untouched

2 early classics by The Emotions – back to back on one CD! So I Can Love You is much rootsier than their later hit recordings at Columbia, with a raw soul groove that reaches back to the girls' roots as an indie soul act. This one's got arrangements by Isaac Hayes that work perfectly for the record – tight, deep, and soulful, with a real no-nonsense approach that opens up the vocals and sets up plenty of tasty hooks. Features the organ-heavy "So I Can Love You", the slightly-funky "Got To Be The Man", and the tracks "Going On Strike", "I Found My Man", and "The Best Part Of A Love Affair". But the best track is "I Like It" – which has this amazing intro that begins with a tight drumbreak, rolling over some descending basslines, then vamping into some horn flourishes before the vocals come in! On Untouched, the group are getting some extra heavy production from Ronnie Williams and David Porter – who bring a darker side to their sound, coming up with heavy soul grooves that really open them up. The classic example of this is the stellar cut "Blind Alley" – a famous sample from years back, and a wonderful funk tune on its own. Other tracks include "Boss Love Maker", "Love Ain't Easy Onesided", "Show Me How", "Love is The Hardest Thing To Find", and "Boy I Need You".  © 1996-2022, Dusty Groove, Inc.