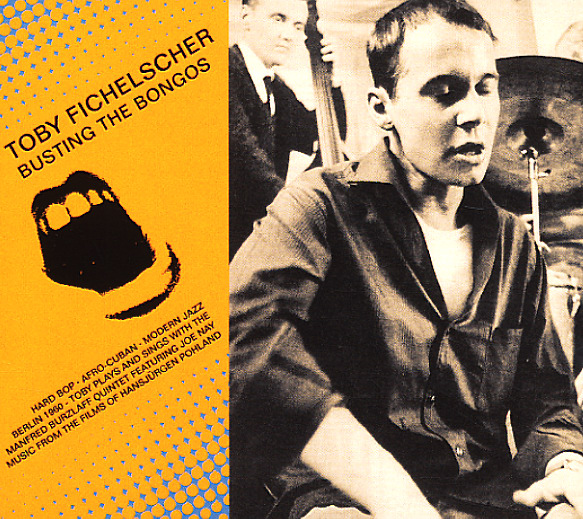 Also available
Toby Fichelscher — Busting The Bongos ... CD 5.99
Wonderful lost work from Toby Fichelscher – a German bongo player with a hell of a great ear for an unusual groove – strongly demonstrated here in a set of previously-unreleased recordings! Toby draws plenty from American percussionists of the 50s – and works here in a modern jazz setting that uses his percussion to bring sharp sounds to a lineup that includes vibes, alto sax, guitar, and tenor – often used in these cool, chromatic ways that work wonderfully alongside the rhythms! Fichelscher also sings and scats a bit at a few points – mixing vocals with his percussion in a way that reminds us of Fats Sadi, a European contemporary who had a similarly great ear for mixing modes. Most tracks here are instrumental, but even those have as much charm as the vocal numbers – and titles include "The Cool Scene", "My First Blues", "Fashion Trip", "Shadows", "With Cash Like This", and "On Chano's Track".  © 1996-2022, Dusty Groove, Inc.

Dusty Vibes – Unreleased Swiss Radio Jazz 1963 to 1967
Sonorama (Germany), Mid 60s. Used
CD...$9.99 12.99
Nothing dusty, and not really any vibes either – but a hell of a great little record, filled with previously unreleased jazz tracks from the 60s! The music's made by the team of trumpeter Hans Kennel and saxman Bruno Spoerri – the latter of whom you might know from sound library ... CD

Berlin Calling
Sonorama (Germany), Mid 50s. Used
CD...$4.99 8.99
Bold bass saxophone sounds from the overlooked Helmut Brand – a German player of the postwar years, and one with a sense of tone and texture to rival that of Gerry Mulligan at his west coast best! The work here is all previously unreleased, but shows Brand as one of the key reed innovators ... CD