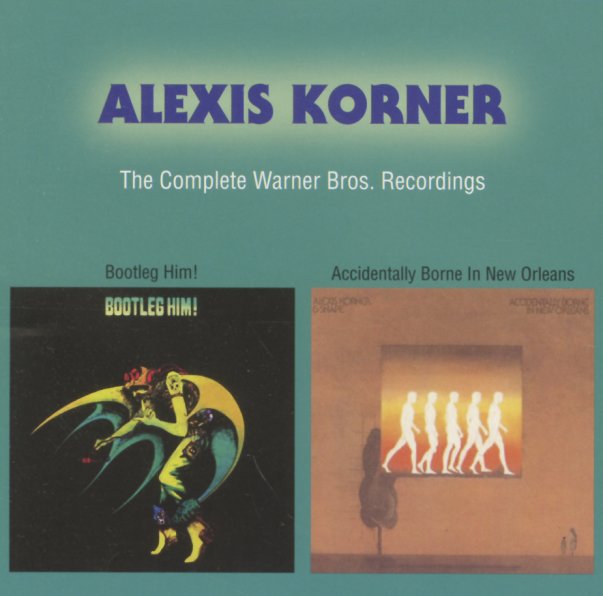 A pair of early 70s albums from the mighty Alexis Korner – back to back in a single set! First up is Bootleg Him – a record with a strange mix of elements on the outside – a confusing title, a proggy-cover image – but one that's got a sound that's a perfect maturation of the fantastic sound of Alexis Korner in the 60s! Korner's one of the overlooked heroes in British music – a strong devotee of American blues, and maybe so much so that sounds more like his inspirations than most – but never in a slavish way, as Alexis is always able to full absorb the sound, and make you feel like it's coming from his own deep soul – and over the years, he really shifted things in these slight, but powerful ways – making his music a huge influence on a big generation of UK rock acts to come. Here, the double-length set is almost a "thanks back" affair – as Korner records with a huge all-star array that includes folks like Robert Plant, Jack Bruce, Charlie Watts, Ginger Baker, Graham Bond, Lol Coxhill, Dick Heckstall-Smith, Ray Warleigh, Harry Beckett, and many more – a fantastic crossroads of all that's hip in British rock, blues, and jazz at the start of the 70s. Titles include "I Got A Woman", "Rockin", "She Foold Me", "I Wonder Who", "Dee", "Love Is Gonna Go", "Clay House Inn", "Evil Hearted Woman", "Mighty Mighty", "Sunrise", and "Hellhound On My Tail". Accidentally Borne In New Orleans (title correct, by the way!) is a record that really has Alexis Korner stretching out from the straighter blues of his 60s material – using his fantastic style on a set of tunes that show as much New Orleans influence as you might guess from the title – but also an evolved British roots rock quality too! The group is very interesting – relatively lean, and with loads of saxophone solos from Mel Collins – the reedman who made some early 70s King Crimson albums so great – plus second guitar from Peter Thorup, who also adds a bit of slide, and makes for a strongly guitar-based groove amidst some of the slightly funky rhythms. Titles include "Gospel Ship", "Lo & Behold", "County Shoes", "Don't Change On Me", "Rock Me", and "Sweet Sympathy".  © 1996-2021, Dusty Groove, Inc.