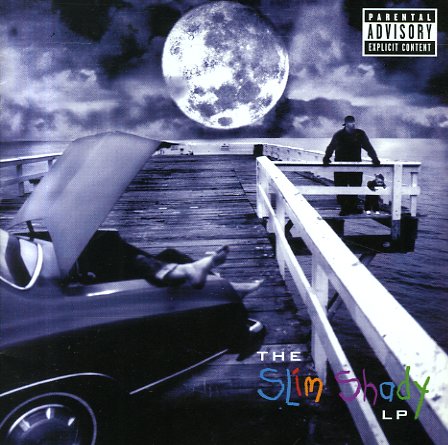 Eminem at an early, angry, darkly comic peak –mixing rawly personal storytelling and revenge fantasies with a cynical sense of humor in ways that weren't entirely unheard of in underground hip hop, but his voice was so distinctive in both sound and style, and blew up so huge, he pretty much redefined popular hip hop and pop music forever. The production by The Bass Brothers, Dr Dre and Eminem himself aren't exactly raw or spare, but they leave so much room for Em's scary, funny, disturbing rhymes to do their damage – and for all the hype about who offensive they are, who went after himself as viciously as anyone else. It's fascinating to this day – making this 20th anniversary edition with a bonus LP all the more warranted. Includes "My Name Is", "Guilty Conscience", "Paul", "'97 Bonnie & Clyde" "Rock Bottom", "As The World Turns", "Bad Meets Evil" and more – plus bonus tracks and 12" versions and including "Hazardous Youth (Acapella Version)", "Bad Guys Always Die" from the Wild Wild West soundtrack, "Get You Mad", "Greg (Acapella Version)" and more. 30 tracks on 3LPs!  © 1996-2022, Dusty Groove, Inc.
(20th Anniversary version with a bonus LP & poster!)