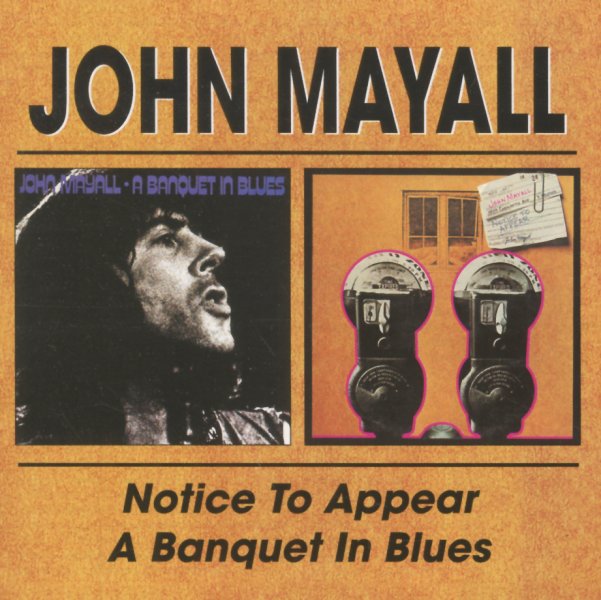 Notice To Appear/Banquet In Blues

A pair of mid 70s albums from John Mayall – back to back in a single set! First up is Notice To Appear – a great little change for John Mayall – a set that has the British singer picking up some strong funky touches from Allen Toussaint – the New Orleans soul legend who produced and arranged the record, and wrote most of the tunes too! For a brief time in the mid 70s, the Toussaint touch was pure magic, and that's definitely the case here – as the record helps Mayall really re-focus his energy with a lean, tight sort of sound – yet one that's never slick or commercial as well! Toussaint plays plenty of Fender Rhodes and clavinet on the album – and titles include "Lil Boogie In The Afternoon", "Who's Next Who's Now", "Just Knowing You Is A Pleasure", "Mess Of Love", "The Boy Most Likely To Succeed", and "There Will Be A Way". Banquet Of Blues is 70s work from British blues rock legend John Mayall – done in a Cali style that still holds on to his roots, but gives the music a leaner, funkier style overall! The vibe's a bit like Mayall's record with Allen Toussaint, although John's on his own here – tightly refining his older sound, but never smoothing things down too much – maybe just making a shift from blues to soul, both in the rhythms and production – shifting the way Ben Sidran did at the time, even though Sidran was coming from jazz. Rick Vito provides great guitar on most numbers – and titles include "Sunshine", "You Can't Put Me Down", "Lady", "Fantasyland", "Table Top Girl", "Seven Days Too Long", and "I Got Somebody".  © 1996-2020, Dusty Groove, Inc.

Moving On – At The Whiskey A Go Go Los Angeles 1972
Deram/Lemon (UK), 1972. New Copy
CD...$12.99 (LP...$14.99)
Bill Cosby introduces this hip little live set from the John Mayall group – which is fitting, as there's definitely a bit of an LA groove on the set! Mayall's still in very bluesy territory, but he also gets some great soul jazz support too – from players who include Charles Owens on ... CD